"No Congregation EP" by Caleb Murray 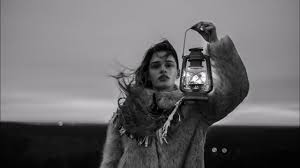 I imagine many "Hot Music Live" readers have seen Caleb Murray play live over the past few years: maybe at one of his frequent open mic appearances or at the Godiva Festival if not one of his own gigs (either in Yorkshire or locally) or possibly on HillzFM radio.

He self describes as a "musician drawing influences from across the musical spectrum, at home most with folk and country music fused with modern elements" which I wouldn't disagree with: though like his songs, a simple statement of intent may simply be merely a starting point for his audience to explore his work & draw their own critical & emotional conclusions.

It is a pleasure to be able to review his recent EP "No Congregation" which is available on all the expected platforms & there might even be a few of the limited hard copy edition still available at the time of writing.

This four track EP opens with "Kick Away", a rather Americana style number which reminded me a little of Steve Forbert or early Steve Earle. Like the rest of Caleb's well evolved personal style, the song is sparsely arranged with just his voice & a couple of  guitar parts which highlight both the quality of his singing & playing & let this well crafted song breathe while giving excellent scope for dynamic shifts within its structure to good effect.

"Mind Behind the Smile" shares a similar approach & arrangement though a marginally slower tempo: suitable for the melancholic feel of the lyrics and this aspect is emphasised by the harmonica passage.

The title track comes up next & again the tempo slows a little on this very contemplative & philosophical piece: possibly the darkest on the record.

EP closer "Portrait of You" offers the listener a banjo part,  a harmonica & tambourine but this does not result in any denser an arrangement: all are deployed sensitively to complement the vocal & each drops in & out as required: otherwise the emphasis is still on the quality of writing & delivery to do the central job on conveying the emotional message. This is perhaps the one most traditional love song on the release & for those seeking an entry point to Caleb's music, this might be the one.

This is a brave & confident set: this artist clearly knows what he wants to say & how best to say it  & it's greatly to his credit that he sticks to his principles with keeping arrangements & production simple & direct, letting space into the tracks & letting them impact upon us. He speaks his mind & lays his soul bare. He deserves our respect.

Today Caleb Murray releases his new single, "Another Sunset" a year & a half after his previous record, the ‘Stories From a Sunny Side' album ...
[1 image] END_OF_DOCUMENT_TOKEN_TO_BE_REPLACED

I hope that you recall my review in "Hot Music Live" of Caleb Murray's  ‘No Congregation' EP? If you have listened to & downloaded "Hot ...
[1 image] END_OF_DOCUMENT_TOKEN_TO_BE_REPLACED