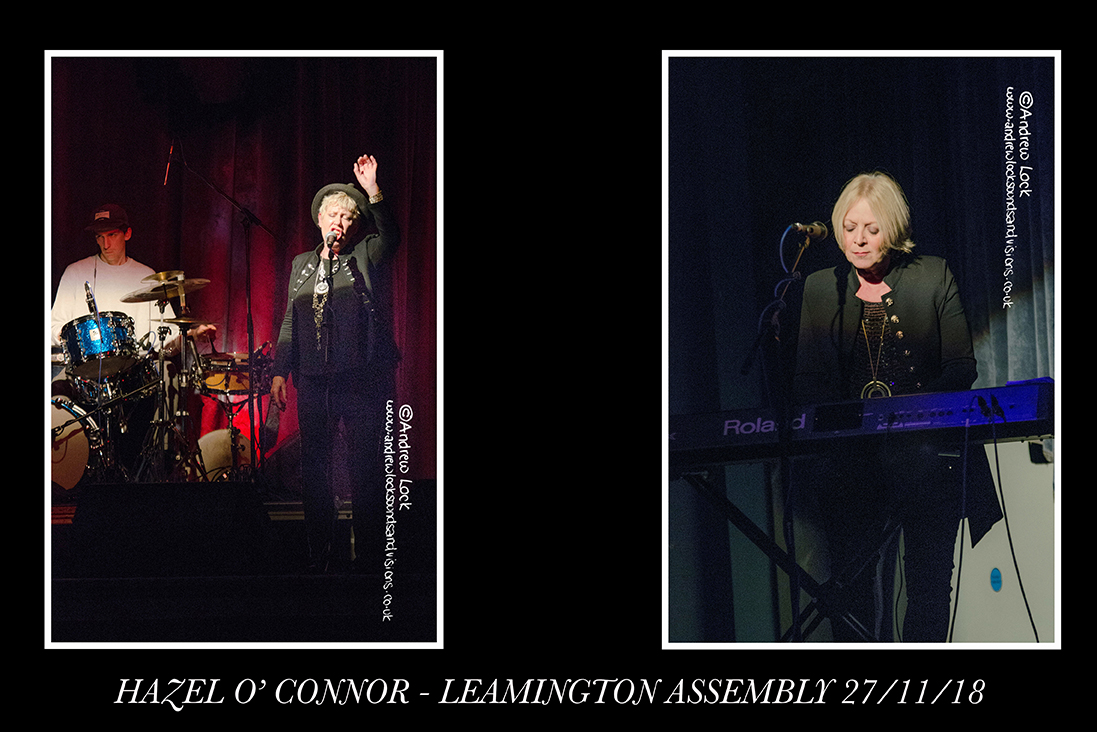 The poster lure was that this event was to be "a rare screening of the digitally re-mastered uncut version of the film, followed by an intimate Q&A and live performance of some of the films best loved songs". Well, what better way to spend a dreary Tuesday evening? Even better, I was there with top local photographer, Andrew Lock! Before the proceedings began, Andy regaled me with just a few stories from the hundreds of gigs he's photographed. One in particular stuck in my mind about how he blagged his way to do a backstage interview and get photographed with Nazareth. In a way, it was a common thread throughout the evening.

The film Breaking Glass hit the headlines in 1980 and starred the then little-known Coventry girl Hazel O'Connor alongside Phil Daniels, acclaimed lead actor in Quadrophenia which was released just one year earlier. It is well accepted that Hazel wrote all of the songs for the Breaking Glass, but during the Q&A session she admitted to having lied to get the film part by boasting that she had more songs ready for the film than she really did! In fact, she admitted she had not even written that many before this point. However, Hazel was a huge David Bowie fan and the idea of working with Bowie's legendary music producer, Tony Visconti, justified her blagging. Visconti's idea was for the soundtrack to be a soundscape of electronic music with sax. The resulting album was nominated for a BAFTA but was pipped by The Empire Strikes Back - ironic given that Breaking Glass movie plot was in part about striking back at the empire, albeit the music empire.

One vital omission was the film's big finale. Hazel knew from the film plot about the outfit, a robosuit, and that her character, Kate, by this time had "gone a little bit over the top with her nuttiness". So she had the idea to have a song about man's arrogance and ultimate self-destruction. Basing it on the Book of Genesis' claim that "God created the Earth in 7 days" she came up with the hit song Eighth Day. Hazel was accused by some of nihilism for this song.

Will You was one song that was written before the offer of the movie role, but Hazel thought it was "a bit soppy" and kept it in the "bottom drawer". But when a song was needed for the love scene with Phil Daniels, it seemed to be a fitting choice. After the film release, Hazel went on tour which included 2 nights supporting Iggy Pop at The Music Machine in London. The first night of these turned out to be a low point for Hazel as the audience were only there to see Iggy. Adding to the disappointment, her hero, David Bowie, who had told her that he would come to the gig, hadn't turned up. That night she considered giving up altogether. The next night, still no sign of Bowie and the crowd resumed chanting "get off you silly bitch", she decided to give the "soppy song" its first public airing. During the lengthy sax solo, Hazel confessed that she didn't know what to do and so shuffled across the stage to hide in the darkness of the wings, whereupon she noticed that Bowie had turned up too! His arrival triggered a change in the audience's mood, they became "very loving and arms around each other". This taught Hazel a big lesson, "if you're not going to share what you are as a writer then you should be doing some other job!"

The end of the Q&A flowed seamlessly into the billed live performance with the band playing the intro to These Are The Decadent Days while Hazel raced up from the floor to the stage. In contrast to the punky music in the film, this was quite jazzy with just piano-like keyboards (Sarah Fisher), saxophone (Claire Hirst) and drums (Joshua Blackmore) behind Hazel's vocals. The setlist mainly comprised of Hazel's own compositions, a few from the film (Blackman, Will You, Eighth Day) but the rest subsequent to it, all apart from a lovely cover of Nina Simone's Do What You've Gotta Do, which is her special go-to-song in troubled times. Each song was introduced with an entertaining short story or explanation.

So to answer my own opening question, surely there can't many better ways to spend a Tuesday evening!

AMBER RUN have announced an acoustic live show ‘AMBER RUN UNPLUGGED' at The Assembly, Leamington Spa on 10th May 2022 TICKETS ARE ON SALE NOW ...
[1 image] END_OF_DOCUMENT_TOKEN_TO_BE_REPLACED