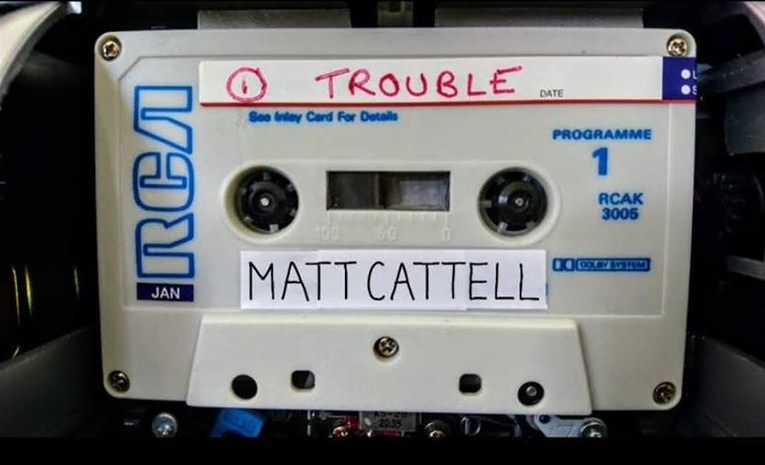 I'm delighted to be able to review here in "Hot Music Live" the brand new single "Trouble" by one of Coventry & Warwickshire's most respected & liked musicians and producers, Matt Cattell

Matt's own name isn't perhaps as well known as it might be as he has either been a member of well received bands such as Pure Fiction or because he has released wok under professional names, most notably as Innovation of Sound  and his D8TA Project. However he has been gigging furiously under his own name in recent months (I've lost count of his 2018 gigs)  including a memorably & extremely popular (I was lucky enough to be there & he drew crowds away from the Main Stage his performance was so dynamic) headlining slot on the Acoustic Stage on Friday night at the 2018 Godiva Festival. (There is also talk I'm aware of concerning a project with a leading Leamington musician in 2019: watch this space).

I find it particularly resonant that Matt has selected this week for the release (which will also open his new album when it is released next month) as very much in my mind in a week marking the 78th anniversary of the Coventry Blitz is his beautiful song "Blitzed" which he created for the ‘Music for Moonlight Sonata' competition to mark the 70th anniversary and which was held by the Coventry Transport Museum & Touch FM. "Blitzed" won the competition too.  (Please do check it out here: https://www.youtube.com/watch?v=0BttKDMQ-YA )

So to "Trouble" itself. Written towards the end of 2017, Matt plays all the instruments on it and produced and mastered it at his own Coventry studio. Much more guitar based than the electronica he's been most recently known, the song in fact is closer to the material he has been playing at all those gigs:  boasting classic songwriting structures & replete with both musical & lyrical hooks. Contemplative in tone yet featuring positive & optimistic lyrics (as is Matt's personal philosophy which is absolutely central to his writing) plus a good sense of space within the track allowing  his voice ring out & impact more on the listener. This is a very catchy song (Matt sure knows his craft) and deserves both airplay & success, but please don't be fooled by the attractiveness of the track: Matt would (I am sure), wish you to take onboard the message he has taken the "Trouble" to pass onto you.

"Trouble" will be released on 22nd November 2018 and will be available on YouTube, iTunes, Amazon, Google etc There will also be a video available filmed in Tile Hill Coventry and Burton Dassett.