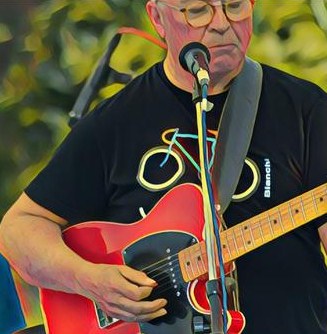 If you like your music of the blues kind, you may well have seen Chris Gibbons play live. A stalwart of the local scene he has played so very many venues both solo & with other musicians. You may have seen other musicians at his gigs as he is a "musicians' musician". A very quiet and modest figure, you may have admired his cultured, tasteful & restrained guitar playing without necessarily understanding just how interesting his career has been. For example I know one & only one person who has played onstage with John & Yoko & only one who has written with Ben E King. You guessed it.

I had the privilege of hearing some rough mixes of material Chris had been working on for quite some time a few months ago. I was really looking forward to hearing that they'd been released. A combination of factors: Chris is a craftsman of the old school and worked hard to get them as he wanted to, plus other things going on in his life including unfortunately an episode of ill health have delayed "Mill Street Blues" (locals will get the title) until now & it's a honour to review it properly.

Chris loves & lives the blues & is equally adept at all its' myriad forms (though if you hear his soul playing he's just as good at that. And rock. And jazz) so you'd not be surprised to hear that the album has examples from several blues forms. However I am sure he is not trying to display his range: Chris is simply an (old school again) song writer & has selected for each song the musical setting which suits it best.

"Grey River" is in Ry Cooder territory with acoustic & slide guitar playing on a swinging & open country blues. However "Let It All Go" shifts a thousand miles north to Chicago and reminds me of some of Dylan's experiments in the basement with the Band.

"Nobody's Business" has a very modern feel with an electronic rhythmic backing and evokes the spirit of Dr John to some extent. "Raildrivin' Man" adds horns and organ & for this song we have arrived in the Memphis area: possibly by train I suppose and had a shot of the old Stax.

"Rambling Soul" introduces interesting female vocals which are processed to sound almost like samples. I found this a most interesting track: not unlike the sort of experiments Blondie or the Clash were making as they moved into new territory once their initial sound had run out of steam.

"The Night the Blues Gone Home" is a majestic song: classic blues rock with a confident lead vocal from Chris: think Robert Cray collaborating with Curtis Mayfield. I liked this one a lot & hope to hear it live.

"Two Bads" possesses (to my mind) the best lyrics on the album: craftsmanship definitely on display here.

"Didn't Know Where To Look" is the album's blues ballad and the closer for the set "Arnie's Blues" reverts to a much more traditional format, honky tonking along to great effect with harmonica & snare to get our toes tapping. This one may stay in your memory the longest...

Prior to its release, you can listen to "Mill Street Blues" here: https://soundcloud.com/chrismediamusic/sets/mill-street-blues