"Only the Night Knows" by Cary L


"Only the Night Knows" by Cary L 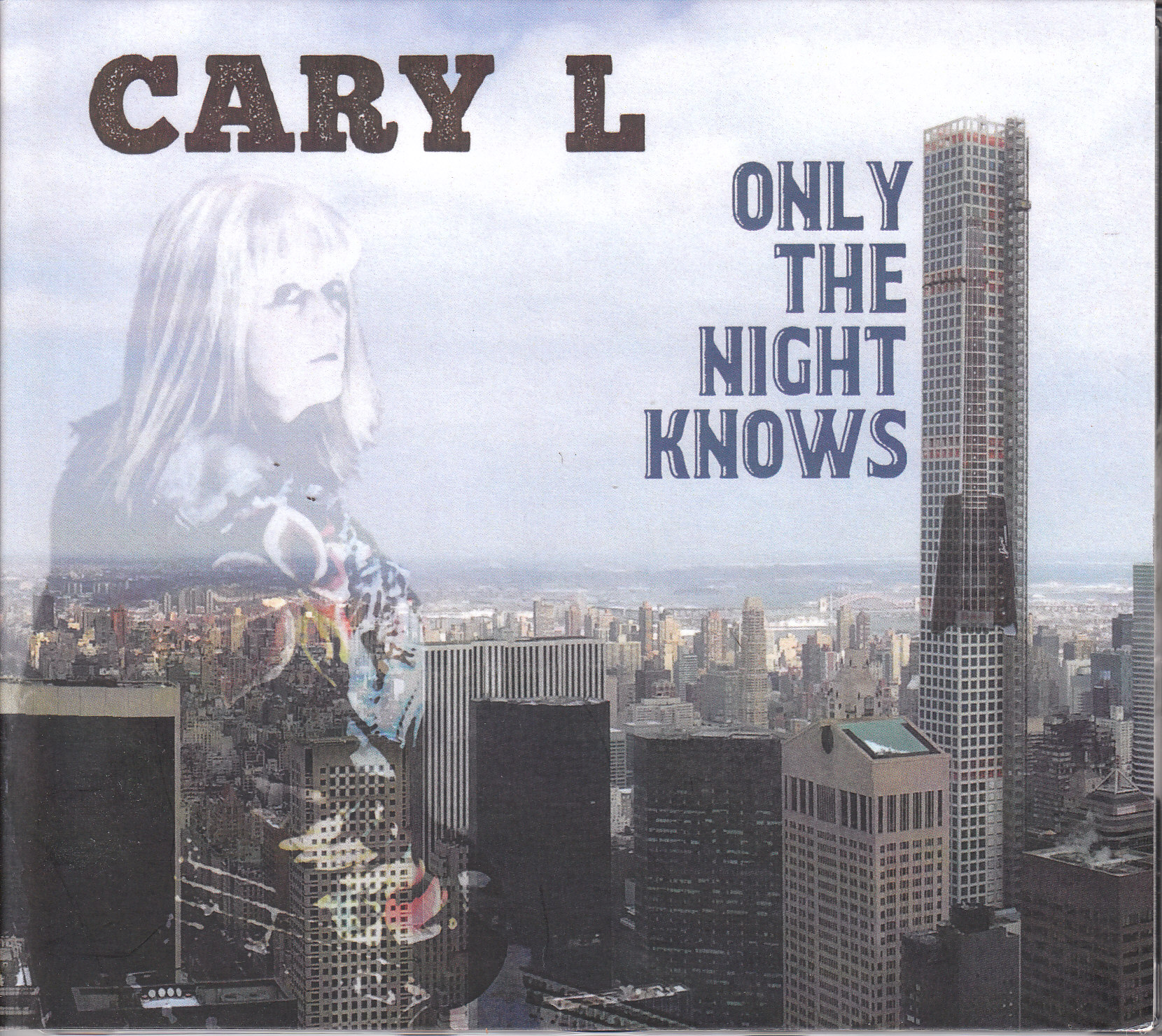 Cary Lord's musical career has touched the lives & ears of a great many people, even if her name is scandalously less known to some of them. Many "Hot Music Live" readers may have first encountered a teenage Cary at the musical workshops at Leamington's Crown Hotel in the late 1970s, playing bass alongside local legends like Steve Walwyn (who mentored her through playing on her earliest demos) and the Shapes. She was a member of cult band L'Homme de Terre who appeared on the iconic "Boys & Girls Come Out to Play" EP (highly collectible if you have a copy) followed by bands including Armalite, Indigo Lady, She's the Leader, Viktoria's Sekrets, The Word Girl & Angel Street. Even if you somehow missed all of these, you won't have missed her playing on the backing track for Roy Wood's "I Wish It Could Be Christmas Everyday" which he uses every time (well every Christmas) he performs it on TV: this was recorded while Cary was bassplayer in his Big Band.

During this varied & highly successful career, Cary has toured the world, played Nashville, won awards & played with & hung out with many famous names on the international scene.

Her songs, under the various names she has played under, crop up regularly on compilations: most recently her work as Blush: which covers her collaborations with various other musicians and whose "Seven Years" crops up on the recently released "Alternative Sounds Volume Two: the cream of Coventry & Warwickshire music, past, present & future".

Apart from her own music, Cary has also been part of the team behind Cabin Studios in Coventry & the associated Sonar Records: in fact managing the latter these days.

Despite having the Blush name, Cary released ‘Looking Back, Looking On' in 2015 under her own name, (or to be wholly accurate as ‘Cary L') an album which gained popular & critical acclaim. An hour ago, I arrived home to find a copy of the follow up, ‘Only the Night Knows' which I popped straight on.

Pretty much following the template of its predecessor, the album features Cary on vocals and most instruments save drums by her co-producer Jake Ingermells (with whom she recorded it at Big Sky Studio) and ukulele by Michael Shepherd. The songs were written by various combinations of the traditional Blush/Cabin/Sonar family: Cary, Graham Wale, Christopher Sidwell & Jon Lord.

I greatly enjoyed the album, but it was not especially what I was expecting. Cary's love of country (and western) only manifests itself deep within songs & the most "country" track is much closer to bluegrass: there are even a couple of reggae songs. The general feel is of a pop/rock album, but the Americana and reggae aside, in as much as the songs adhere to any definite genre, I hear hints of the edgy New Wave pop of Cary's ‘L'Homme de Terre' era (or to be precise what others were doing at that time). This surely demonstrates the breadth as well as depth of her interests & skills.

First up is the title track. This one is definitely much more in the rock style rather than the country one Cary is so well known for. Immaculately crafted in terms of writing & arrangement wherein the experience of writing classic & compelling songs certainly shows along with tasteful restraint in the playing, this is the one which would offer great single potential if the old rules still applied. This one should work really well if & when Cary airs it live.

"Ain't Gonna Cry Tonight" is a complete change of style and reminds us that although Sonar Records was well known for quirky pop & powerful rock, it did have several reggae acts (think City Dread or Kenny B (aka Kenny Love)) onboard and that side has clearly influenced this beautiful lilting song whose playful beat underscores the singers determination to transcend sadness

"Are You Ready?" is the third Lord/Wale/Lord composition in a row & yet is different to both its predecessors: goodness knows what I should describe this as: it has elements of sure footed New Wave pop, mid 70s pop groove & even vocals which drift towards Donna Summer. You can dance easily to this one (though I admit I was too busy reviewing to do so)

"Daytime Job" was yet another one which instantly appealed to me: a sort of story (or at least moral?) it reminded me of the sort of thing Stiff Records used to find & release in its heyday (think early Kirsty MacColl possibly): classic female voiced pop with a sharp edge under the sugar.

"Get A Grip" is cut from similar cloth (and not, as you might have suspected, a Stranglers cover) in fact it might even be the same character replying to similar critics and is nicely decorated by Cary's own harmonica playing. The song actually is from 1980 when Cary first recorded it (much faster) with L'Homme de Terre. (She also cut a 1995 version with Viktoria's Sekrets)

"Got You Around" & "I'll Be Here For You" move into gentler territory: again the instrumentation is clear & distinctive but played with the restraint noted earlier giving Cary the chance to deploy appropriately quieter vocals. The latter is another track first recorded in 1995 by Viktoria's Sekrets.

"Is Your Love?" has a very catchy melody which will linger in the mind while "Bright Side" returns to the reggae side of Cary's musical palette though in this track, the feel  is the key rather than it  being a purely reggae track like "Ain't Gonna Cry Tonight"

"Love On Ice" & "Passionate Strangers" are returns to the pop style previously referred to: I particularly enjoyed the latter and next up is "Single Bed", although again clearly within the overall pop/rock stylistic camp (it sounds a bit classic Fleetwood Mac to me: the sort of thing Christine McVie writes) has nevertheless the first hints on this album of the country sensibility one normally associates with Cary. This track was a co write between Jon Lord, Graham Wale & Crokodile Tears' Chris Sidwell, though without any of the quirkiness of the latter's normal wry writing style and again was originally recorded by Cary in 1995 with Viktoria's Sekrets.

"Pittsburgh Steel" kicks off appropriately enough with metallic sound effects & a drum evoking hammer beats: another beautifully observed (love) song, this time from blue collar USA: another of my favourites on the album.

I also loved album closer "Moonshine": classic Americana (this is the track with the ukulele on it & Cary adds further harmonica plus her slide guitar). Maybe if she ever plays it live she could jam it with Leamington's Folly Brothers.

This is an immaculate album: every track perfectly written, arranged, performed & produced by people who know exactly how to do it: Jon & Graham have been writing together since the 1960s.I appreciated how well also the dynamics of the set were worked out: a brisk start, a move into softer focus & then foot down to finish.

No one who listens to it is likely to not enjoy it & I am aware of several Cary fans among radio presenters who will play it. I wish it might be taken up by mainstream media, though I am a realist enough to know that quality of this sort of craft is no longer the key to that.

Cary's live work, without a settled band,  is sporadic: I am much looking forwards to hearing her play at a private event in the next few weeks & it would be nice to think that people will listen to ‘Only the Night Knows' generate the demand......

"Tumbleweed And Dust" by Cary L

It's proving a year when most of our expectations have been torn up & scattered on the winds.
[1 image] END_OF_DOCUMENT_TOKEN_TO_BE_REPLACED