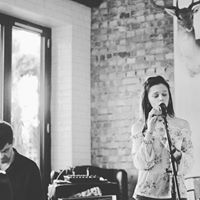 They are currently working on a new song "Re Write" and hope both to produce it with a full instrumental arrangement including a choir. The aim is to raise money for both Guide Dogs for the Blind & Motor Neurone Disease awareness (discussions are in hand with the relevant charities to confirm their approval as I write).

In their own words:

"This is due to John having the daily struggles of being fully blind yet still empowering his independence. We would like to raise money for MND as Faith recently lost her cousins to Motor Neurone Disease earlier this year. She believes more awareness needs to be made about the illness. We would like to bring the two communities together to be hand in hand with helping raise money for both charities!"

Both Faith & John are also looking to take part in a sponsored wolf run to raise funds.

Blind Faith are certainly on a swift trajectory at present: Touch FM's Neil Wilkes (of the Coventry Culture Show) has been singing their praises to me, they are established on both BBC Coventry & Warwickshire's "Introducing" and Paul Sanders' weekly poll on HillzFM. They have played with the equally meteoric Joe Dolman & have recently also become involved in the "Alternative Sounds" project capturing the cream of Coventry & Warwickshire music, past, present & future.

May this new and very worthy project meet as much success as they have been generating recently.

I started composing this review while last night's concert was still in progress & after a while realised that it was in danger of becoming a ...
[1 image] END_OF_DOCUMENT_TOKEN_TO_BE_REPLACED

It is good, so soon after reviewing a live Blind Faith performance when I saw them collaborating with Chalk Drawings at APE Promotions' "Surreal ...
[1 image] END_OF_DOCUMENT_TOKEN_TO_BE_REPLACED