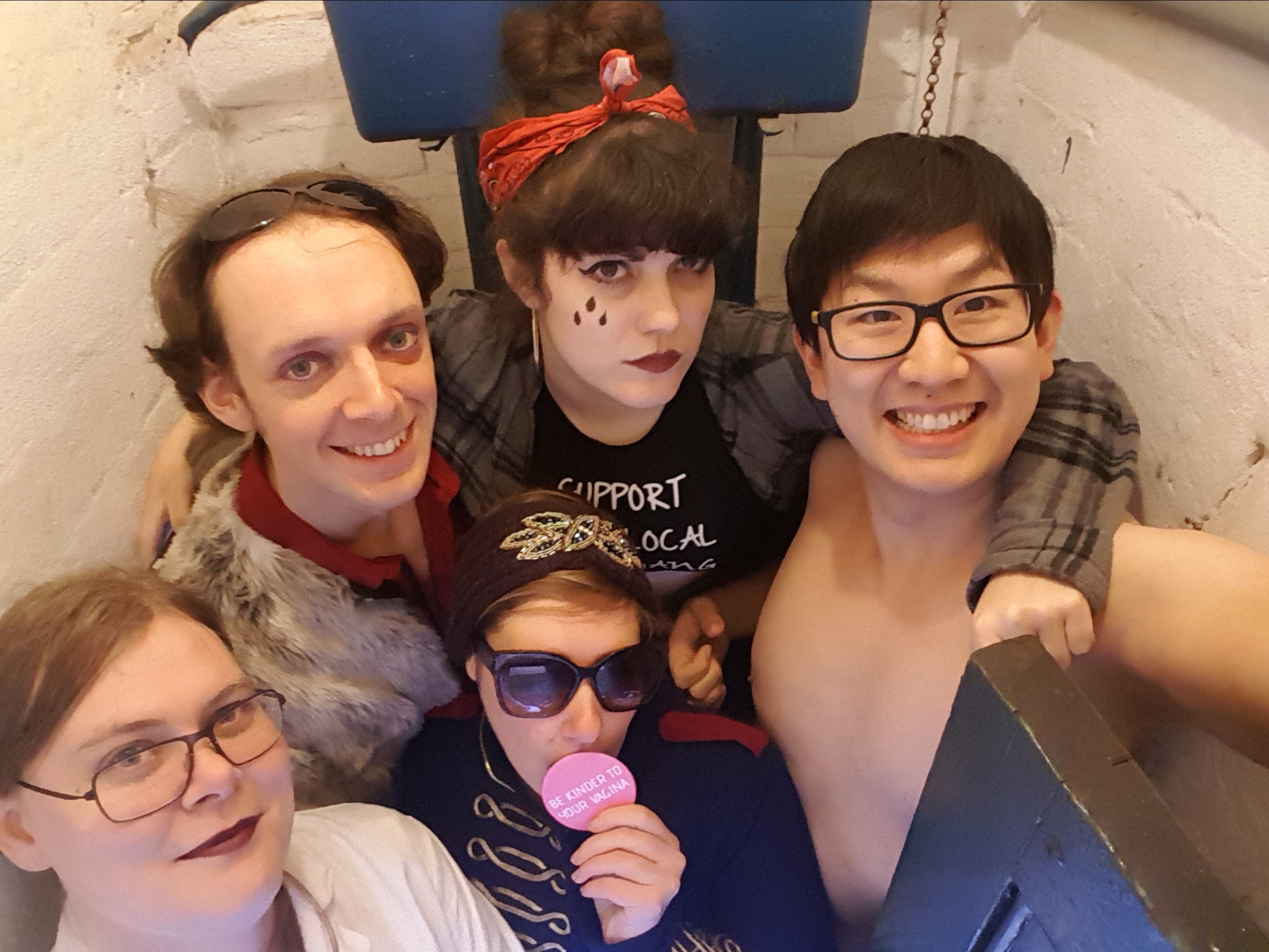 With my involvement in the "Alternative Sounds" project, quite a few of my pieces tend to reflect that side of music: the artists of quality but not necessarily high level public profile. Some of these are in that category currently because their heyday was some time ago & they never hit the commercial big time. Some are just starting what we hope will become successful careers. However, another  joy of the project is working with more esoteric & difficult to categorise bands. Some are paradoxes: I think of bands from Coventry & Warwickshire who have very significant international fanbases but are less well known in their home area: bands like ATTRITION or the Jack O'Bones.

Others, like Deathsex Bloodbath inhabit strange and truly alternative genres & sub-cultures, without even clear labels (which to me is a huge positive, though other sections of the music media can get quite upset & confused without the safety net of labels). On the video offering a taster for their new record "Swipe Right with Deathsex Bloodbath" (due out on June 16th) (https://www.youtube.com/watch?v=FX8RpP-Bca0&feature=youtu.be) they describe themselves as the "legendary queercore punk glam weird band" and who am I to disagree?

In fact, they are part (if they are part of anything) a sort of transgressive underground scene with a few other members, but operating at a national rather than local level: along with bands such as Anarchistwood for example. Hence the songs feature "taboo" subjects and no doubt the lyrics might offend your average "Daily Mail" reader: but that doesn't worry me nor do I suspect the band worry over it. "Shocking" people is no bad thing if it makes them think & helps them engage with your music & breaking taboos of course makes for a healthier body politic.

Their precedents are fairly clearly punk & glam rock to some extent (see above) but not just the camp aesthetic of much of that music but also the darker themes of Lou Reed & Bowie. I also hear links to the work of the Sadista Sisters: an equally cult & decadent band.

I'd urge you to catch a live Deathsex Bloodbath show: the music may be great but it means so much more within the context of their extraordinarily theatrical live act: one opportunity might be at the launch for this record on 16th June at the YARD in Coventry with support by Kermes. Certainly if you liked bands such as Deaf School or the Tubes, expect similar only more.

So what about the EP itself? Created by Justin Appropriate (guitar, gang vocals, claps, foley editing),  Masokiss  (bass, gang vocals, claps), Sadogasm (vocals, guitar, keyboards, gang vocals, claps), Sororicide  (drums, percussion, gang vocals, claps) and Switchblade  (vocals, gang vocals, claps) some of whom you may have seen as members of other well known local bands, it was recorded at the Moonbase, with additional recording at Big Al's Telephone Exchange. The record has five new originals, four of which have already entered their set. "Tinder is the Night" grabbed me by the body parts mentioned so often by the band: outrageously catchy: the sort of song that T Rex might have recorded only to have banned by the BBC. The participants are enjoying a fine romance with no kisses but boy do they make up for it with other interactions. There is even a Richard Dadd reference in there. You'd have to have the sense of humour of a Brexiteer not to enjoy that one. "Drag King" reminded me more of the Au Pairs (another complement in my book) and I appreciated their updating of some of the themes of that fine band (playing with different sex indeed) If Kurt & Courtney had ever moved to Coventry then they might have written a song like "Rehabilitate Me". This & "Do Better" blur the roles of the two singers in interesting ways: instead of two individuals talking to each other, is it a couple sharing one idea? One partner alternately agreeing with or confronting the other? Perspectives shift unnervingly in this weird world. Accusation, recrimination, resolution. The most punk song "Let's Fuck" doesn't mince its words nor message: it puts across its manifesto much as Jayne County did & probably will go down as well as she did on mainstream media. Me? I liked the message & the sentiment.

This band may struggle to get invited onto the poptastic BBC Big Weekend (though it would inject a certain something if they were), but they are on the "Alternative Sounds" radar & it's great that DJ FestiPaul (Paul Sanders) on HillzFM has them on his too. If you like the space where artschool sensibility hits the streets with a camp swagger and a knowing leer, then this music is for you.