We don't yet know much about Toby Marks.
Get in touch and we'll add some details. 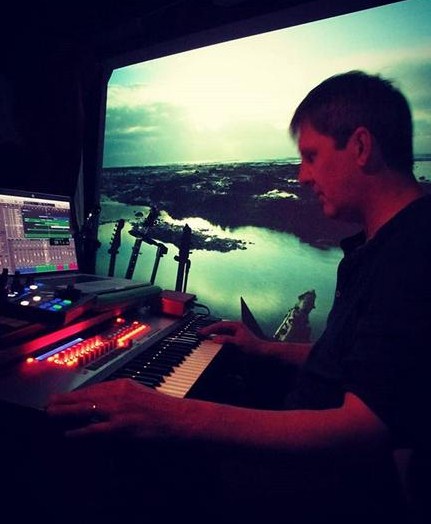 Who likes being out of their comfort zone? As reading my reviews in "Hot Music Live" will show, I can mostly find some words (if any words can ever adequately reflect music) to describe my own reaction to artists I like: but the range of styles while not narrow (I hope) nevertheless  shows certain patterns of types I've listened to for years & so have evolved a form of vocabulary for. My immersion last evening in the predictably full house Magic Lantern gig of Toby Marks & Andrew Heath challenged this vocabulary enormously. While I've occasionally reviewed electronic artists (e.g. Morocco Dave, ATTRITION, Engram etc), I've not done so yet for ambient music: that it was played by some of the finest exponents on the planet only raises the bar, so my apologies for the inevitable naiveties & gaucheries.

I'm not sure I'd even have had the nerve to commit anything to paper had not both Andrew Heath & master visual manipulator Patrick Dunn both taken time to answer what must have seemed very basic questions & explained their art in terms I could understand with courtesy & patience. Thank you.

Toby (whose work with Banco de Gaia will be well known to readers) and Andrew were presenting their new album "Motion" in its entirety (though not in the track order on the release) prior to its release next month. This fascinating & enchanting work has evolved into a "journey of journeys" throughout England from its genesis as a field recording exercise in Norfolk which yielded seal sounds plus that  of a narrow gauge steam railway around which the first of four pieces on the album is structured. This "East" piece was subsequently joined by a chain ferry in Poole Harbour ("South"), a lift descending into the depths of a Welsh slate quarry in Wales & in Yorkshire, the sound of gliders overhead & a narrowboat voyage. All journeys, all generating unique sounds & all subsequently processed & augmented with other found sounds, samples, keyboards & guitars.

As noted, Patrick Dunn (his work with Tangerine Dream may be familiar to you) was with them & his visual input was key to fully realising the work live. I may have been out of my comfort zone in the writing, but was far from it in terms of reaction to the music: I might easily have closed my eyes to better enjoy the sounds, had it not been for the compelling images, linked organically to what was being played.

I don't understand the techniques too well, but even I could spot the tasteful restraint & minimalism. Most electronic musicians I've seen have had far more kit. Both Toby & Andrew played solo sets before "Motion" and each essentially used a laptop & a single control box with occasional what I could call "conventional" keyboard playing.

For "Motion" and the final improvised piece, Andrew kept to his keyboard setup & Toby alternated between again almost conventional playing of a Stratocaster and using what looked to me like an Ebow on a second instrument with much pedal use.

The sound (through the new Magic Lantern PA) was excellent: one of those occasions where when one track featured a buzzing insect, your eyes immediately looked round the room for it.

Subjectively, if you are asking, I enjoyed the music. Objectively they are clearly three excellent artists. Not only did I think that the music was good & tasteful, I appreciated the vision & artistry that went into it. Things & places were effectively evoked & in some ways it reminded me of a sonic version of those "tours of Britain" by the likes of Priestley etc: neatly marrying the pastoral in some tracks at least (not really the "West" mine one) with the fact that the basis of each track was technological.

The solo pieces were rather distinctive: Toby's ethereal with spiritual images provided by Patrick, while Andrew's were more sombre accompanied by very grey & funereal visuals. The final piece was more "spacey"... If any of those are adequate words.

You can pre-order "Motion" here: http://www.discogecko.com/product/motion/