We don't yet know much about The Ellipsis.
Get in touch and we'll add some details. 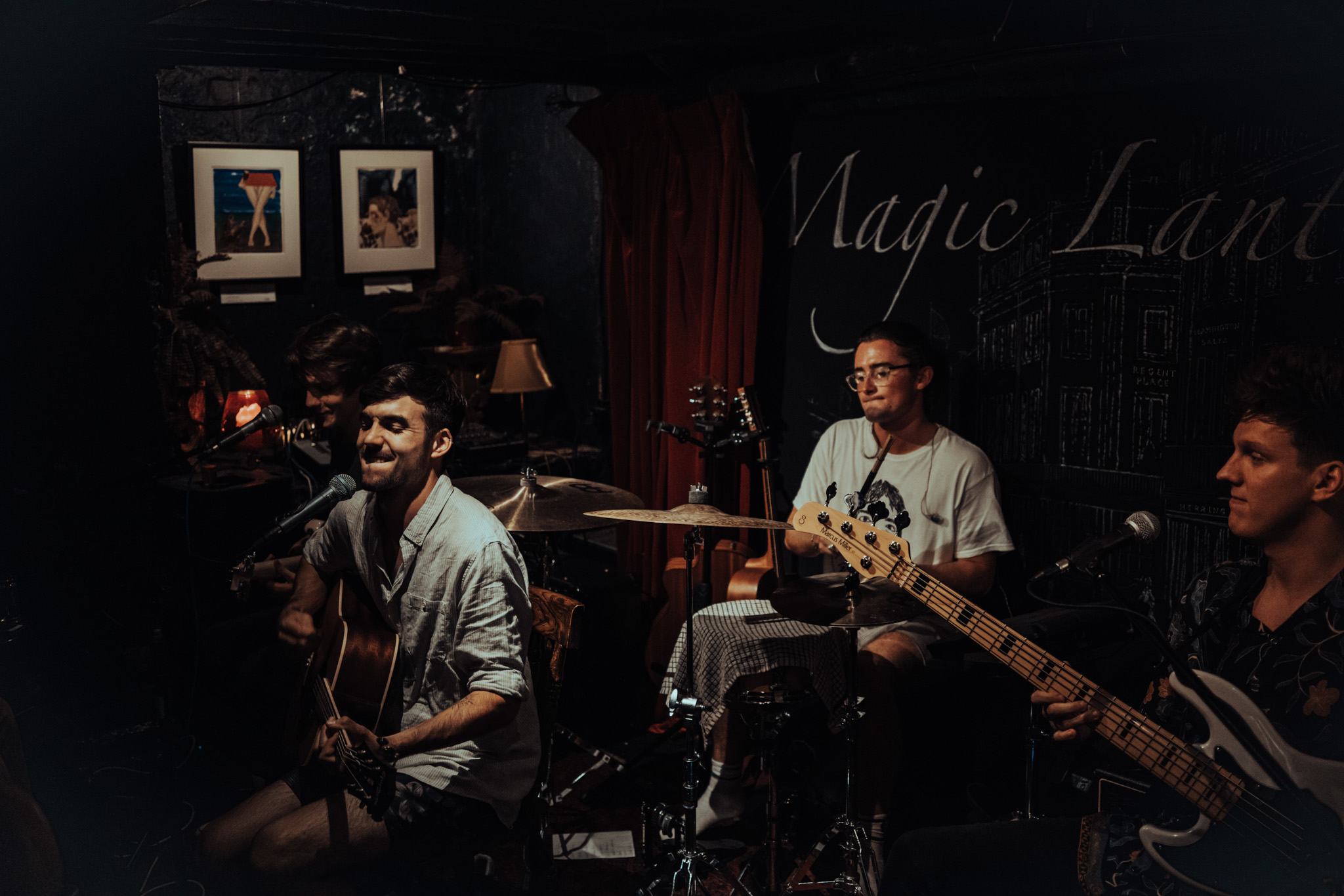 It all seems such a long time ago, so many & so powerful have the subsequent performances at the Magic Lantern been, that it is an interesting thought to recall that there was in fact a first ever gig at the venue:  roughly a year ago.

The band kind enough to inaugurate the concerts at Temperance was The Ellipsis & last night they returned by very considerable popular demand, though it is worth recording how supportive band members have been in the meantime, either playing solo gigs or with others or purely by attending gigs by others. This is much appreciated & they deserve our thanks: it is interesting how many great local artists "walk the walk" by supporting venues & their fellow artists and that is a really important element in why the local scene is currently so buoyant, diverse & creative.

Tonight their very special guest is long time Ellipsis collaborator Hannah Woof (and the specialness was enhanced by their unveiling her participation less than 48 hours before showtime).

Playing with Ellipsis guitarist/vocalist John Connearn as she did at her recent Magic Lantern headline gig, Hannah demonstrated why she is so highly rated amongst local audiences & fellow musicians: in fact one of the many conversations I was part of at the 2019 Godiva Festival was around "why has Hannah never played here"?: an omission I am sure will be corrected in 2020.

There is so much about Hannah's craft to applaud: much of which I have already done so in previous reviews (I think this is the fourth live review I written about her) yet each time I see her she brings something else to the feast. Much of it is continually evolving stage presence & command of her audience. Her voice remains a most impressive instrument but it is how she uses it which is the real joy. Endlessly expressive, I can think of several other local singers who interpret lyrics especially well, but none obviously exceeds her in this respect. Carefully choosing her phrasing, tone & volume, often lingering long over individual words & lines, adding tension, she is of course, a few well selected covers apart, communicating her own highly personal lyrics which she tends to describe as "gloomy" but which essentially do not recoil from addressing the dark side of the human psyche. Even with these skills, I appreciate how much her interpretations can vary with her work: "Blue Eyed Bastard" for example, which I had heard her play before with the venom you'd expect from the title, last night came forth with a much more understated delivery, more of a reproach to her subject  in style  I think & this actually gave it more power & impact.

Hannah's set included new material (one co-written with another of her regular collaborators, Joe Dolman) and this inevitably meant that other songs such as "Addicted To You" (one of my favourites) had to be omitted, but that just shows how strong her repertoire is & how she is keen to keep her set fresh. Hannah is in fact recording new material but emphasised to me how she wants to take the time to get it absolutely right before committing to a release date.

A final element worth mentioning is her guitar playing (given the circumstances this was her only instrument of the evening: there really wasn't space for her keyboard given the Ellipsis' kit): possibly this is the third element of her talent, after her singing & writing, which people will note about her, yet it is excellent, whether solo or entwining with John's in moments of real aural magic.

You can find out more about Hannah & news of gigs & releases at her web pages:

The Ellipsis had actually promised a special acoustic gig for the venue. I will admit that Henry played an acoustic guitar & Alex's drums were not mic-ed up but that was as acoustic as it got. What we heard was in fact a really effective and obviously really carefully constructed set which sounded loud enough not to in any way compromise the essential Ellipsisness of the set yet did not overpower the small space. Alex was perhaps most individually effected swopping his bass drum for a cajon (played with a pedal) and covering his snare with a cloth, yet he turned this into many positives with a really crisp & incisive performance with a lot of interesting detailed cymbal work.

Otherwise, elements of the "specialness" manifested themselves in the uniqueness of the setlist. Drawing on material from their earliest days via rarely played gems, customised covers (including mashed up Snow Patrol & Biffy Clyro medleys) to songs of the bang up to date ‘Grow' EP, they gave the highly enthusiastic & responsive audience something to remember and cherish. They even added (purely by audience demand) a version of "Mr Brightside' for their final encore which clearly from their comments can't have been rehearsed but which was immaculate. People clapped. People sang along. People stood up.... It certainly was a high energy gig but yet it still worked within a cellar. Hats off for the sound engineering.

Sitting up close to them & conscious that I wanted to write this review, I found myself reflecting on a lot of little details: the beautiful accuracy & imagination of Alex's work. The restless complexity of Harry's basslines (sitting two feet from his fretboard, had I been a bassplayer I'm sure I would have learned a lot). The incredible power as well as beauty of the three piece harmonies. How Henry's baritone just gets more and more compelling. The subtlety & invention of John's guitar playing whether interjections or full blown solos (and he doesn't do long selfish ones of these) and how they bring constantly varying colours & tones.

I think what struck me most was that even from the earliest songs, the Ellipsis have written imaginatively & unusually constructed ones: yes everyone correctly focuses on how catchy & memorable they are, yet every single one keeps on going off in interesting and anti-clichéd direction throughout.... Long may they continue to entrance and move people as they did last night.

"Grow" by The Ellipsis 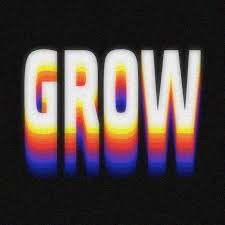 Last week, I had every intention of writing a review in this magazine of the gig I was intending to attend at the Zephyr Lounge by The Ellipsis, supported by Free Galaxy, and CANDID. I imagine most of you know what happened & why that review never was written. The bands found out over social media: "gutted doesn't even cut it" was the headliners' response: a commendable restraint on their part as other things might have been said.

In no way can such a disappointment be cancelled out, but at least today I can write an Ellipsis review since their new single "Grow" is out today.

What of it then? Well no-one unacquainted with the band will be surprised by the elements which shape it: not just excellent musicianship (band members are in huge demand by other artists to work with them) but even more importantly, tasteful musicianship. None of the band plays to show off, they subordinate their skills to the needs of the song & the collective. In fact I was talking to their manager Paul only last week about how their extra curricular playing is informing Ellipsis music: far from distracting them, playing solo & with others is simply adding to the palette at the group's disposal. In fact as you may recall of my review of singer Henry's recent solo gig (as "Henery"), his voice is developing more & more distinction & confidence in what he can do with it, and I detect elements in "Grow" I hadn't previously heard. The title is "Grow" and that's something The Ellipsis continue to do. Not all bands can or do.

Like many of their best songs, the single has several contrasting sections which add it its quality: choppy nervy bits slide into smoother soulful passages and then groove onwards. Little licks jump into the ear, massed vocals join Henry, all the instruments contribute interesting and imaginative moments which never outstay their welcome. Solos take place behind the singing. This is a band with a great attitude to Service of the Song.

It is clearly really radio friendly & made up of exactly what should be a popular success (if anything, somewhat more sophisticated & subtle than many hits). Let's hope it does as well as it deserves to.

As I said, it is something positive to be able to post about The Ellipsis at this time, though of course their plan originally was to have a great gig AND release the single. And why ever not?  I hope all "Hot Music Live" readers will support those artists hit by the closure of The Assembly/Zephyr Lounge (and of course The Arches which also shut their doors this week alas): some, like Joe Dolman who has moved the concert he was so looking forwards to to Leamington Parish Church on December 6th, others are still working on such moves or simply have lost the showcases for their talents. No doubt too there is space on these pages for a discussion on the economics of venues & other associated issues such as the damage done to the Assembly after closure.

In the meantime, you can catch The Ellipsis at Temperance on 26th July