We don't yet know much about Roddy Radiation.
Get in touch and we'll add some details. 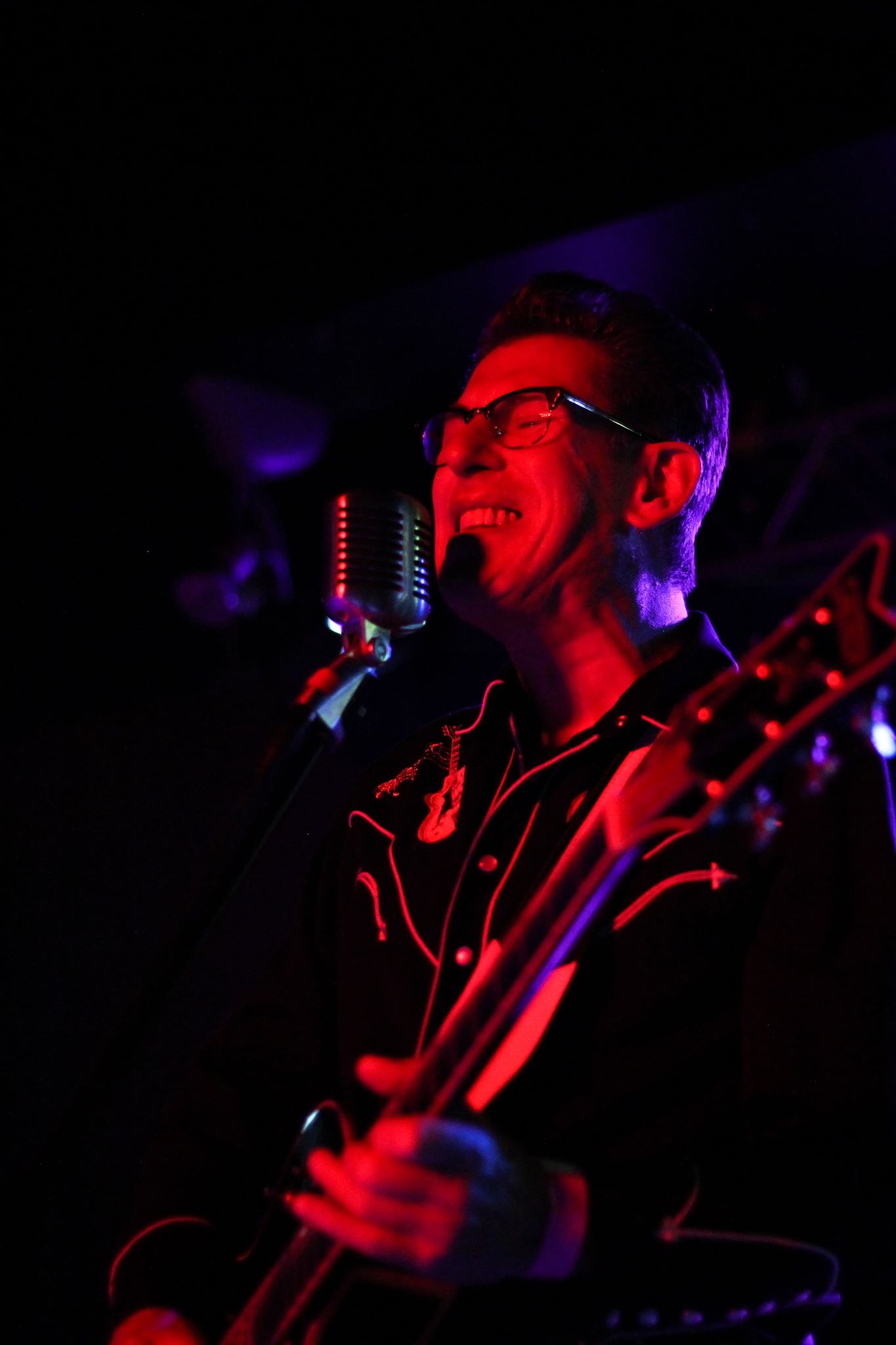 Collaboration is of course great in music and when like minded people work together, real magic can be catalysed.

"Alternative Sounds" have been working with Johnny Satsangi for a while now: Satsangi kindly offered their song "Sixty Four-Seven"  for "Alternative Sounds Volume One" and Johnny has designed all the sleeves for the series. Saturday 29th September saw the first collaborative gig between the two organisations: the latest of Johnny's APE Promotions nights at the Zephyr Lounge but this time a special (in several senses) featuring current & impending "Alternative Sounds" artists.

It was, as a total concept, a triumphant evening. Johnny's vision to bring high quality music to audiences receptive to new sounds fitted in snugly with the "cream of Coventry & Warwickshire music, past present & future" strapline of "Alternative Sounds". Many of the audience had not heard all the artists involved & it was great to witness their responses & hear from them their appreciation. As ever with such events, the emphasis was on diversity: the artists were pretty dissimilar in style and that too was a huge plus when too many bills these days seem to "play safe" and patronise their audiences with homogenous sounds.

Equally I am very aware how much such gigs spur on & excite those playing: every artist has expressed how much they enjoyed the night.

First up was cult band (they are into their fourth decade of activity with a brand new album "Old Skool" recently out) Crokodile Tears. Unfortunately Crok & Hawklord Jerry Richards could not make the gig for personal reasons but core Croks Chris Sidwell & Alf Hardy, as they often do, adapted the set for a duo plus a few extra backing vocalists on some numbers, including local idol Sam McNulty of Squad/Giraffes fame. Playing a mixture of old favourites such as "Saturday Girls" and "Egg ‘n' Chips" plus new songs such as "Yoko" and "Bobbie" (its live debut) the band got the night off to a fine & appropriate start: I must also at this point pay tribute to the superb sound all night as I certainly noticed it from the very start.

Nest up were the irrepressible Grassroutes who sadly had decided to make this their final gig under that name/lineup though I understand members will continue to work together. Across the unsurprisingly high energy set, guests & former members marked the occasion by joining the current lineup on stage and performing fan favourites & even (ironically) new material. Anyone who has ever seen a Grassroutes gig will fairly easily picture the audience frenzy.

APE stalwarts Satsangi were up next and like the two previous bands, debuted new material including songs from their forthcoming album "You Saw Something" (watch out for this next month: it's amazing). I was in the company of several people who had not previously seen this band live & am pleased to report how impressed they were. Like me, they played a "guess the influences" game but it is a complex one with Satsangi & one we are all probably never destined to get to the end of. The new songs certainly fit in well but are distinctly a progression from the older material: some being punkier and even more garage in approach than before, others revealing a poignancy & intimacy they had rarely explored hitherto. One particularly moving moment was a beautiful number dedicated to a recently lost friend, several of whose family were present.

Roddy "Radiation" Byers  has been one of the greatest supporters of "Alternative Sounds" from the very beginning of the project, contributing songs he had recorded or written  to the vinyl EP and volumes one & two plus sleeve notes, advice & encouragement.  Offering to headline tonight was yet another demonstration of that support & one which is greatly appreciated. When someone with a global reputation, having had international number one hits gives that level of support to local music, not only does it help enormously but it really shows they are truly one of the good guys.

Accompanied by "Sid Precious" (possibly a stage name?) , playing a beautiful Gretsch and singing through a 50s microphone, Roddy demonstrated to an audience who were able to sing along with most of his set just what a virtuoso guitarist he is & what a great voice he has, bringing the all the emotion out of the songs. Roddy performs always with both total commitment which makes him the artist he is & with his heart on his sleeve. On this occasion the set was much more skewed towards the familiar Specials canon than is often the case, with his own "Rat Race" & "Hey Little Rich Girl" (which of course Amy Winehouse covered), plus "Gangsters", "Do Nothing" & set closer the "Jamaican folk song" "You're Wondering Now", as well as several of his many other great songs from other periods in his fascinating career with the Wild Boys, Tearjerkers, Bonediggers & latterly his Skabilly Rebels.

In complete contrast, as each act was during the night from their predecessor, were cult band Jackdaw with Crowbar (another band into their fourth decade & the group which  Stewart Lee described as "the best thing to come out of Leamington since the Grand Union Canal" and whom both John Peel & Thurston Moore have praised), now comprising a core duo although many great local musicians have passed through the ranks. In fact they are actually now known as ‘Jackdaw with Crowbar Because You're Worth It' but it's easier to fit the current name in this review than on a flyer...

Described by one recent reviewer as "weirdos", who am I to dissent? Johnny usually reserves this slot in the APE night bill for the more avant garde & challenging groups & Jackdaw rise to this. Clad in gold lame suits (which tend to rip if you writhe on a gig floor at midnight holding an artillery shell. Especially if enthusiastic patrons try to debag you), dinosaur masks etc with a huge battery of electronic & vocal effects, the overwhelming impact is both disorientating yet stimulating. Excellent guitar playing complements the more esoteric noises & the presentation with lights (fairy & otherwise), backdrop projections, dramatic delivery & powerful political themes. Their great experience means it works & they certainly both engaged & excited the audience who lord knows had already had a pretty stimulating evening by this point already....

Last up was Mr Binx who had already played trumpet & sang with Grassroutes under another guise earlier in the night. I imagine many people take him for a DJ given the way he plays his music in a modest way from the wings on a laptop. I suspect, especially by the end of a powerful evening that they are expecting some sort of chilldown. Neither is actually the case. What you get is minutely crafted original material (the man is a self confessed studio perfectionist) and I was nearly knocked off my feet by the bass sound on one track I was too close to the speaker for. I leant on the fixed bar counter for support but found it shaking....

Yes it was an eclectic evening: lots of diversity but there were many things which bound it together & which were more intangible: a shared sense of community among those there & an interest in originality, humanity & spirit. Let's hope we can have many more of this sort of thing..

As we wait for hard copies to go on sale of "Alternative Sounds: Volume Two", the "Alternative Sounds" team have turned their attention to the next stage of the project to share the cream of Coventry & Warwickshire music: past, present & future.

The aim is to try to put on showcase gigs featuring acts on the records or who will appear on future volumes, to introduce their talent to audiences who may not yet be aware of it.

The gig has been set up in collaboration with APE Promotions' Johnny Satsangi. Johnny is already heavily involved in the project: his sleeve designs adorn the albums & his band Satsangi have the track "Sixty Four-Seven" on "Volume One"

Johnny & APE are a snug fit for "Alternative Sounds" too in a shared philosophy of presenting audiences with surprises & promoting the work of those who might not necessarily be on everyone's radar.

For this debut, we are extremely grateful for the support of one of the project's most generous members: Roddy "Radiation" Byers who has kindly agreed to headline. Roddy will need no introduction to anyone, given his international reputation. Indeed, as I write this, he is packing his suitcase for another US tour with his Skabilly Rebels.

Also on the bill are current "Alternative Sounds" stars Satsangi & Crokodile Tears plus acts we intend to feature: cult favourites Jackdaw with Crowbar, the ball of primal energy which is Grassroutes & the marvelous Mr Binx himself.

Tickets are £6 in advance (more on the door) from www.apepromotions.com from  https://alternativesounds.brownpapertickets.com/ and shortly from a range of other outlets in Coventry & Leamington to be announced.