We don't yet know much about Rob Halligan.
Get in touch and we'll add some details.

I'm much obliged to Rob Halligan who has been in touch with me to ask me to pass onto readers of "Hot Music Live" the details of Motofest 2021: particularly the musical aspects which he organises.

Contrary to the impression some media reports may have given, the Motofest "event" itself is to be spread across a month from this current weekend (17th/18th July)  while the musical part is happening  on the weekend of the 7th and 8th August.

You can check out full details of the whole month at:

In terms of the music, the Nexus ICA Motofest mainstage will be hosting two days of live music in Millennium Place, Coventry.

Over the weekend acts will include The Upsiders, Vamoosery, Noiises, Dave Goody, Rifferspock, Danny Ansell, Rosso and Nunc with more to be announced.

Saturday night is MotoFest's Big Night out, a drive-in event hosted by Rob and Sandra Godley with special guests, live music and loads of laughs.

All the events are free apart from the Saturday night drive in. Tickets will be available on the Motofest Website soon.

As Rob tells me:  "It's really exciting that we've been able to put this programme together for Motofest this year. It's been a tough year with very little happening in the way of live music so having a festival is such an amazing venue and in the City of Culture year will be amazing.' 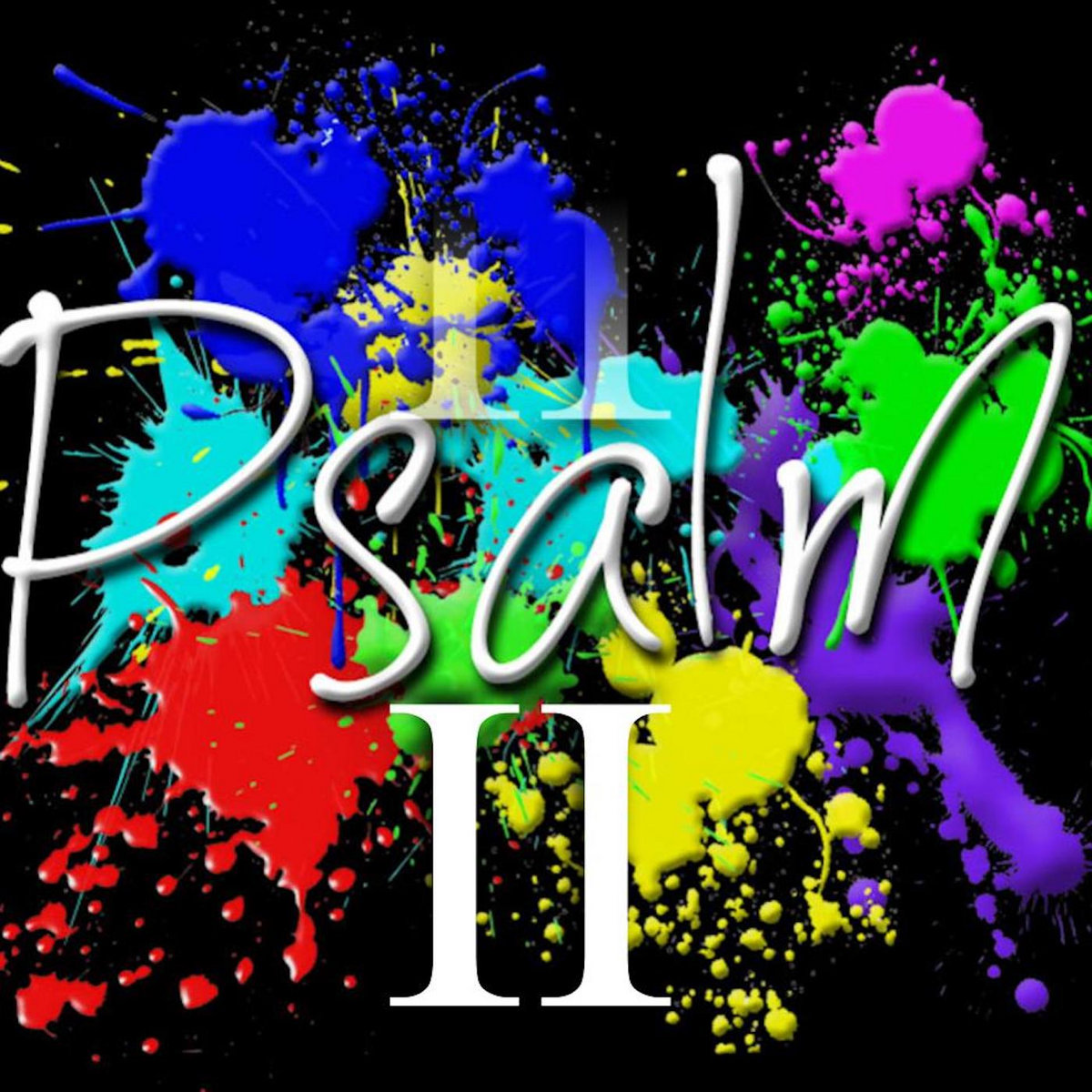 Although his spirituality informs & enriches virtually all his work, in April 2019 Rob Halligan released a very explicitly sacred collection of songs based upon the Psalms called "Psalm" (you certainly can't claim he is indulging in misleading advertising).

The project however has continued and since then Rob has accumulated five more tracks of a similar nature ("Into The Valley, "O God Most High", "Show His Love", "Beautiful" and "And In His Prescence") with more to come. These are now available as a "pay whatever you think appropriate" download from his Bandcamp page, with more to be added over time. 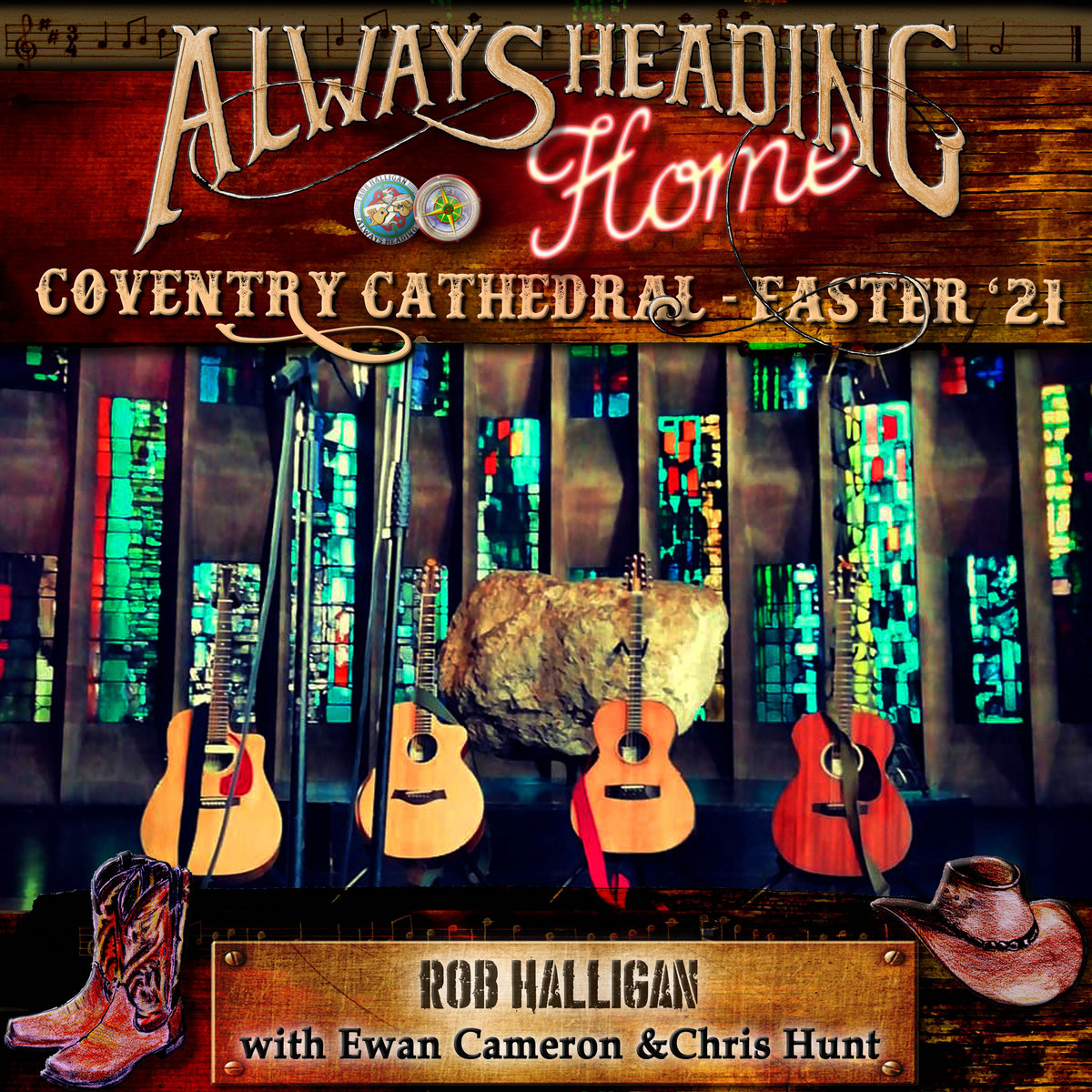 Fresh out today is a live album of the special lockdown gig which Rob Halligan played at Coventry Cathedral with the help of Ewan Cameron and Chris Hunt a couple of weeks ago, and which you can hear for free by downloading it from Rob's Bandcamp page at https://robhalligan.bandcamp.com/album/coventry-cathedral-easter-21

You can also watch footage of the concert at  youtu.be/8dRoh1mwLwA

The album features predominantly tracks from Rob's most recent releases, reviewed here in "Hot Music Live" and now you can hear them performed live which has always been his intention & hopefully you will still have the chance once the many dates & tour he had planned can be rescheduled.

The songs themselves are "Promised Land", "Wild Horses", "Come Take Your Place", "The Other Side", "When I Survey", "Bigger Than Me" (the current single), "Wayfaring Stranger", "You Never Can Tell" and "Always Heading Home" (the title track of his latest album).

It looks & sounds a very magical session & one which no doubt being there would have enhanced in such a performance space ideal for the sentiments in the song as well as the acoustics: however since it wasn't, we can thank both modern technology for making sharing the experience possible & Rob's generosity in gifting it to us. 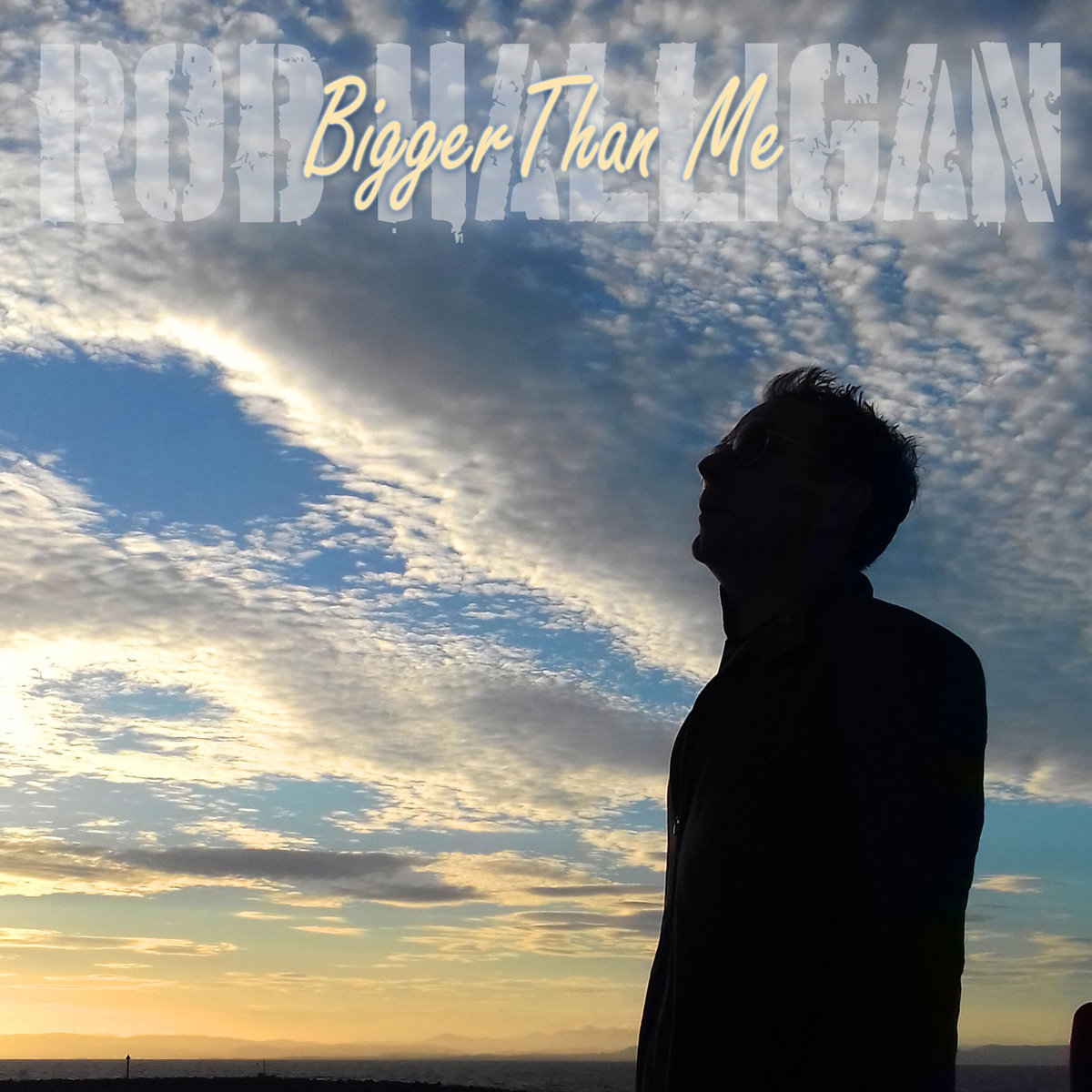 Today marks the release of the new Rob Halligan single entitled "Bigger Than Me", a swift follow up to his ‘Christmas Time' EP and as it's Bandcamp Friday, all the more incentive to purchase it now so a higher proportion of the proceeds goes to its creator.

Although I understand that the song's origins lie in an as yet unrealised musical (guess why that hasn't happened so far), as a stand alone track it seems to me to fully justify its creation, speaking as it does on the universal theme that the concept of love transcends all of us as individuals: so thanks Rob for sharing this now when we need it instead of keeping it securely locked away awaiting its parent project.

The song (rather unusually for Rob a piano led piece) is in some ways a highly personal reflective diary, articulating (as many people probably have been) spiritual doubts given the suffering around us, bad enough at any given time but augmented currently with new & widely distributed sadnesses. It must have taken some courage to set such thoughts down for public consumption, but as ultimately his internal debate leads him to the conclusion that the power of love transcends each of the various negative forces he sees in the world around him, this is a summation which is obviously something he is comfortable to share. Thank goodness he did not reach the opposite possibility.

The slow stately (and beautiful) music is ideal for the subject matter & carries the listener along at such a pace that we can hopefully follow Rob's reasoning as he unfolds it & be convinced by it: anything faster probably would not have given us sufficient time.

May his optimism & hope come to pass.

Something else exciting to look forward to from Rob is a very special Easter unplugged gig from Coventry Cathedral: so keep an eye out for details of that. 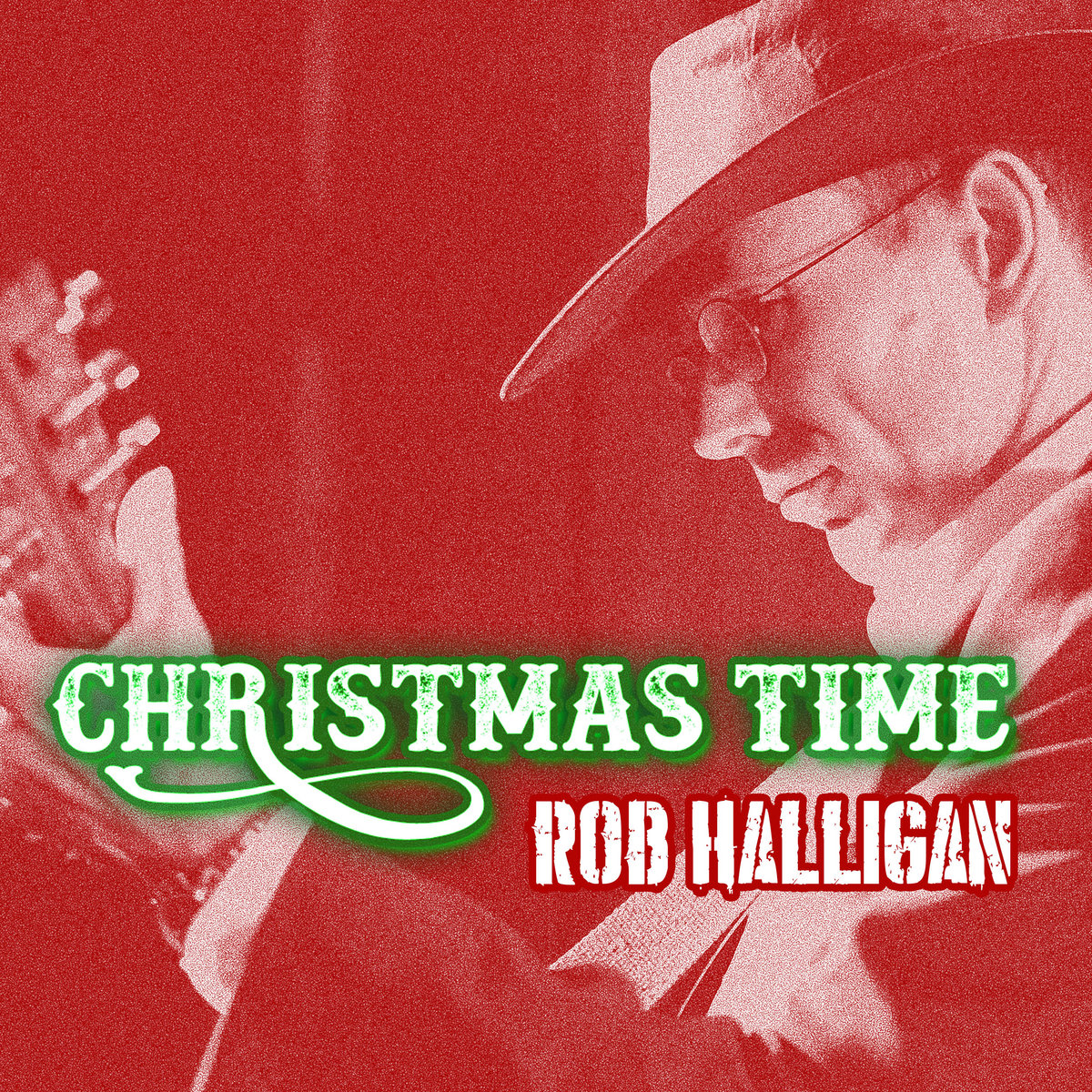 Rob Halligan is another of our local musicians who could certainly be described as "prolific" in terms of just how much excellent music they are currently managing to create & release despite the constraints upon them. Less than a month after being able to share with you his long awaited album ‘Always Heading Home', here I find myself telling you about another multi track release, in this case a three track EP called simply ‘Christmas Time'.

Containing three songs:  the title track and a versions of "What Child Is This" & "O Come All Ye Faithful", the collection seems to pick up from where its predecessor left off with regards to how it must have been created: Rob plays most instruments & sings (as you might imagine) and is joined by his in-house backing vocal team of Jean & Nikita Halligan while Ewan Cameron provides whistles on the title track.

This back to basics recording approach (the tracks are credited as being recorded "in the Sewing Room") over the past few weeks (the finished recordings were mastered by Chris Hunt) no doubt was driven by a certain amount of necessity, as with a lot of other artists under the present conditions, but Rob, like others, has made a set of virtues out of this.

When you are this good a musician, the quality of self recorded material really does not dip in comparison with what it might otherwise have been: external sessions might have produced different approaches to playing brought by other artists, but those remain speculative in the face of what we are hearing now. I dare say the process probably tends to simplify arrangements, preventing certain specialised parts and overdubs, but I'd argue that any potential loss in that direction is more than compensated with an enhancement of honesty in the final version: and that plays I believe strongly with musicians such as Rob.

"Christmas Time" is probably the stand out track & it works very well on a number of levels. A sort of Celtic folk rocker (with echoes of Big Country to my ears), it is another of Rob's recent "state of play" songs, looking squarely & unflinchingly back at 2020, yet also celebrating family, friendship & support & looking forwards as much as back. The theme of travel also fits in very nicely with what he wrote so much about on ‘Always Heading Home' and maybe if the latter is to be re-released in the future this would make a good bonus track. It's also very catchy & stands considerably taller than many of the deluge of Christmas related songs I imagine will start flooding radio schedules very soon.

"What Child Is This" is a much gentler & acoustic offering, being a sensitive, beautiful reading of the popular Victorian carol which shares a melody with "Greensleeves". I can't say I fully understand how artists (especially those who generally write original material) begin to contemplate covering traditional songs when there are so many potential alternative versions for theirs to be measured against by those who like to do such things.  In Rob's case, he simply goes for what he himself presumably sees in the songs in question & so we get heartfelt renditions where commitment to the words is as manifest as is joy in singing the tune: in this case something rather personal & profound, in the case of "O Come All Ye Faithful" a rousing exhortation to the listener.

This EP is certainly one of the highest quality new Christmas releases for 2020 which you'll be hearing.

Rob Halligan fans will have felt blessed over the past week with two separate releases which I hope you won't mind my telling you about in a ...
[2 images] END_OF_DOCUMENT_TOKEN_TO_BE_REPLACED

A strange one this, the latest single release from Rob Halligan: "Promised Land" which comes a month after his previous one, "The Other Side" was ...
[1 image] END_OF_DOCUMENT_TOKEN_TO_BE_REPLACED

"The Other Side" by Rob Halligan

"The Other Side", the new single by Rob Halligan, will be released on all major download and streaming services on June 22nd but don't worry, ...
[1 image] END_OF_DOCUMENT_TOKEN_TO_BE_REPLACED

Today I'm pleased to be able to draw your attention to a new release by Rob Halligan, namely "Come Take Your Place", his first since "Nothing ...
[1 image] END_OF_DOCUMENT_TOKEN_TO_BE_REPLACED

"Nothing Good Is Wasted" by Rob Halligan

Today I am pleased to be able to tell you about a new release from Rob Halligan: "Nothing Good Is Wasted" which is a taster for us from his upcoming ...
[2 images] END_OF_DOCUMENT_TOKEN_TO_BE_REPLACED

"We All Write The Songs" by Rob Halligan

As promised in my review of Rob Halligan's recent gig at the Magic Lantern with Kristy Gallacher, here is my review of his most recent album, ...
[1 image] END_OF_DOCUMENT_TOKEN_TO_BE_REPLACED