We don't yet know much about Oliver Darling.
Get in touch and we'll add some details.

Oliver Darling at the Town House 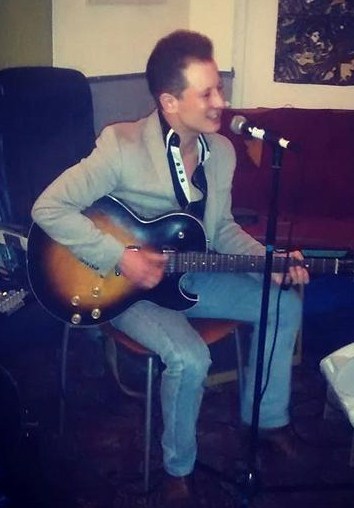 It was several years ago that I first saw the excellent trash/garage/rock & roll band the Dirty Robbers & frankly loved them. So I was delighted when their guitarist Oliver Darling who is perhaps most well known for playing with Imelda May (and indeed other respected artists such as Tanita Tikaram) played a solo gig at Leamington's Town House on Saturday 21st April 2018.

When Reverend Robert played this venue a month ago, I did express admiration for the classy acts Jonny Roden has here & this night fell into that category: one for the connoisseur. Of which there were several on the premises.

Looking the part to a "T" and playing a beautiful vintage guitar, Oliver played a great many numbers of generally the blues variety, with variations of texture provided by dips into various sub genres such as country & Chicago blues, & showing his immaculate slide technique but only dipping into the popularly familiar with a final Chuck Berry number: otherwise the set, though vintage, was fresh to our ears. He also had guest harp player Tim Porter up for a number.

What particularly impressed me was his economy of technique: no lightning & grandstanding runs nor showing off: in fact like the best players, he made it look all so easy & as if he had all the time in the world and emphasised his mastery of feel over fretboard gymnastics. This naturally put the spotlight on the music & that's fine in my book: like I say: classy stuff....