We don't yet know much about Morocco Dave.
Get in touch and we'll add some details.

Morocco Dave at the CET Popup 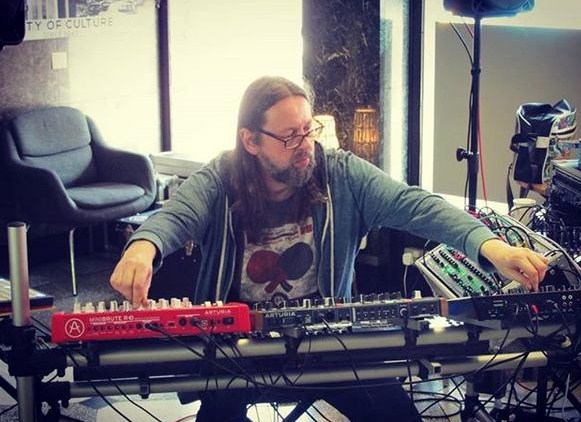 It is a huge shame that the superb opportunities for performance that the CET Popup has offered are only lasting a short while: though plans for a successor venue in the old "Elephant" building at the Sports Centre are very much looked forward to. In the meantime, the latest in a growing line of gigs by the real cutting edge of local music here was a performance by Morocco Dave: a doyen of the local electronic scene. You may well have caught Dave at one of the events last year to celebrate the 80th anniversary of the birth of Delia Derbyshire: and it is firmly into her tradition of experimental yet deeply humane music that he falls.

Dave  builds some of his own instruments and uses a wide range of digital & analogue keyboards etc live to create rich and moving pieces. Today, as he does, his entire live performance was improvised. However if you'd like to check out some of his recorded work, why not visit his page www.moroccodave.com? He also has a piece "You May Not Be The Coolest Person Here" on the latest volume of "Alternative Sounds" (https://alternativesounds.bandcamp.com/album/alternative-sounds-volume-2) and it was interesting to note so many of the "Alternative Sounds" team at the gig, including producer Martin Bowes whose band ATTRITION are another leading electronically inclined group with a high critical reputation.

What else I like about Dave's approach to music is that he has created a video explaining & demonstrating how he created "You May Not Be The Coolest Person Here": check it out at https://www.youtube.com/watch?v=sQ83BaJzAUk&list=PLKKYt03T-cPAJ64mTGpsoas_GhsNOhWNs&index=41&t=0s

It's an excellent venue: I recommend that you visit it while it is still open (ie the next fortnight) and I recommend Morocco Dave to you also..... You may watch him & enjoy as people did today, or dance as others did or simply immerse yourself in his soundscapes. All possibilities exist & are permitted when he plays...... You may even learn some new things as I did. 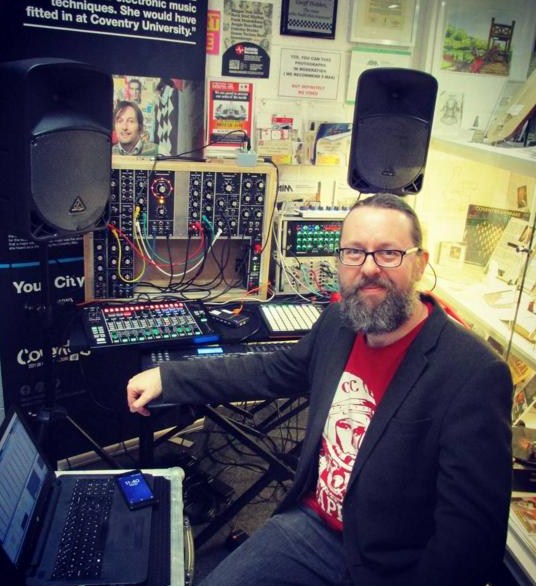 On Saturday 6th August 2017, the latest Artist of the Month was unveiled at Coventry Music Museum. As customary, to introduce their work to the widest audience, a Heritage Lottery funded "Sounding Off" session was hosted by Museum curator & founder, Pete Chambers BEM who took Morocco Dave (for it is he who is the said holder of the distinction) through his career before opening up the session to questions from the audience. At the conclusion, Morocco Dave demonstrated on the impressive array of kit he had brought with him (some built by himself and which can be seen in the photo here), why he is dubbed "the Wizard of Sound"

Interestingly, although schooled in keyboard playing from an early age (though "schooled" may be inappropriate as Dave's accounts of his musical education at school was not at all positive), he in fact was a guitarist in a number of bands when he started playing.

This led to the verge of success but sadly no further and so after a substantial break from music, when the opportunity to join a band was offered him, his keyboard skills opened the door to the position on offer.

However, it is clear that accumulated skills & experience gleaned over the years were able to deployed as well as formal keyboard playing ones. A long term interest in production, rooted in teenage collaborative experiments with multi-tracking using two cassette players (handy also for offering tape copying facilities to schoolmates) led Dave into producing work. Consequently, he now is able to not only build his own equipment to chase down the bizarre sounds he hears in his head, but also manipulate them using studio techniques.

While probably best known for the more dance orientated work which has attracted the attention of so many including of course Brody Swain of BBC Coventry & Warwickshire (and Morocco Dave not only features on Brody's "Wall of Future Music" at the Museum but provides the soundtrack for the accompanying film), he also has a number of side projects including working more with 1970s analogue style sounds.

Unsurprisingly, when events were put together to commemorate local sonic pioneer genius Delia Derbyshire on what should have been her 80th birthday in May of this year, Morocco Dave was the "go to man". On one day he oscillated (appropriately) between stints on the Herbert Art Gallery & Museum where he invited visitors of all ages to experiment with his kit and then created tracks from their work, and the Coventry Music Museum where he played a very well received set. When the Blue Plaque for Delia was unveiled on her childhood home, the BBC invited him to perform & indeed he did, duetting at one point with Dr Who himself: or "High Wycombe Colin".

To hear the whole of the interview and Morocco Dave's performance, please check out the videos at: