We don't yet know much about Merrymaker.
Get in touch and we'll add some details. 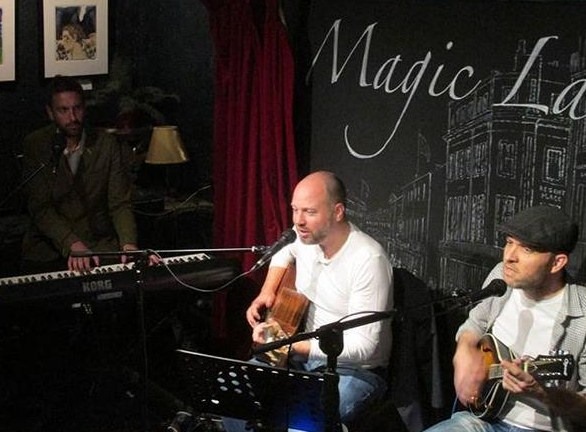 The gig at the Magic Lantern last night was described by venue creator & owner Adrian Gains as "one of the best nights we have had so far...very talented musicians and the music was perfect for the space"

I could stop at that point I suppose as I can't argue with that. But I expect you want a bit more detail?

The headliners were one of the most respected of locally based bands (the audience size & response certainly reflected that) namely Merrymaker.

This band are not only highly popular in their own right but put a tremendous amount back into the local scene (another excellent reason why I'm delighted to write about them in "Hot Music Live") with open mics & showcases they host (see below for one immediate instance) and mentoring many great emerging artists, several of whom have already featured in this magazine.

Tonight they brought along Rosie Samaras & her guitarist/vocalist accompanist Fred. She was new to my experience & so I personally am grateful. It was a bit of a shock when she announced that it was only their second gig together: I would not have known from the assurance of the performance.

Rosie is a prolific writer of strong original material (although she likes to throw in the odd classic cover) and it is really difficult (I am pleased to say) to categorise them: not least because they do vary in style quite a lot amongst themselves. Several had a jazz feel to them (emphasised by Fred's acoustic guitar playing), others veered towards contemporary R&B (there was an episode of rapping in there) while echoes of folk, country & classic Brill Building songwriting were detectable at various points. The songs were all well constructed musically & lyrically: they deserve as wide an audience as possible.

Rosie has a mellifluous & excellent voice which I gather from what she said has considerable reserves of power which she deliberately held back on in deference to the intimate space: in which case I'd love to hear her when lets rip with all her resources. Her stage presence too is commendable with an excellent rapport with the audience.

You can find out more about all things Rosie Samaras at her page here:

Merrymaker are master musicians. Listening to them at very close quarters, I was reminded of the Band in the way they harmonised & swapped instruments throughout the night. Adam Barry (formerly of The Misers and Merrymouth) mostly played keyboards but late on switched to both the harmonica & accordion. Ex- Ocean Colour Scene and Merrymouth member Dan Sealey was mainly on guitar until he switched over to keyboards and Paul McCormack rotated between mandolin & guitar, with a ukulele close at hand "just in case".

What can one say about musicians this skilful, this experienced & this tasteful? I for one was content just to drink in their beautiful harmonies & playing & appreciate the thoughtfulness of the lyrics, which tend to examine contemporary themes, though several also looked at the angsts of the human condition in general. One standout & "hairs on the back of the neck" moment in this respect was their hymn to a departed friend "Evergreen" which had particular resonance for a Magic Lantern audience as the song had inspired the name of one of the most popular acts to have played in the venue.

Their  genre was again hard to pin down: the band are thought of as being folk or folk rock but that barely covers it. A few songs were excellent traditional folk style but others fitted no recognisable category at all. I could list a load of genres but it wouldn't be terribly enlightening. If you want to play "name that genre" I suggest that you go and see them. You'll not regret it. They even tipped a hat to Dan's old band with an Ocean Colour Scene number.

Very occasionally they strayed into covers which were idiosyncratic to say the least: a beautiful and gentle version of the Stranglers' "Duchess" and a hauntingly stark (just piano & voice) "I Am The Resurrection".

Like Rosie & Fred, the band have an easy & genuine rapport with their audience: good humour & joking characterised the set & I suppose acted as a contrast to the deep themes of many of the lyrics. Even a technical mishap didn't divert them for long with Adam & Paul carrying on one song as an unintended duet while Dan resolved it.

Talking of their work in showcasing local talent, I appreciate it's short notice & this bit of information is going to become obsolete really quickly, but Merrymaker are hosting an event in Rednal today (Sunday) at Joe Joe Jim's Bar from three o'clock, featuring themselves and two big Coventry & Warwickshire favourites, Taylor-Louise & Naomi Beth

Merrymaker also return to the Magic Lantern on January 18th.