We don't yet know much about Live/Wire.
Get in touch and we'll add some details. 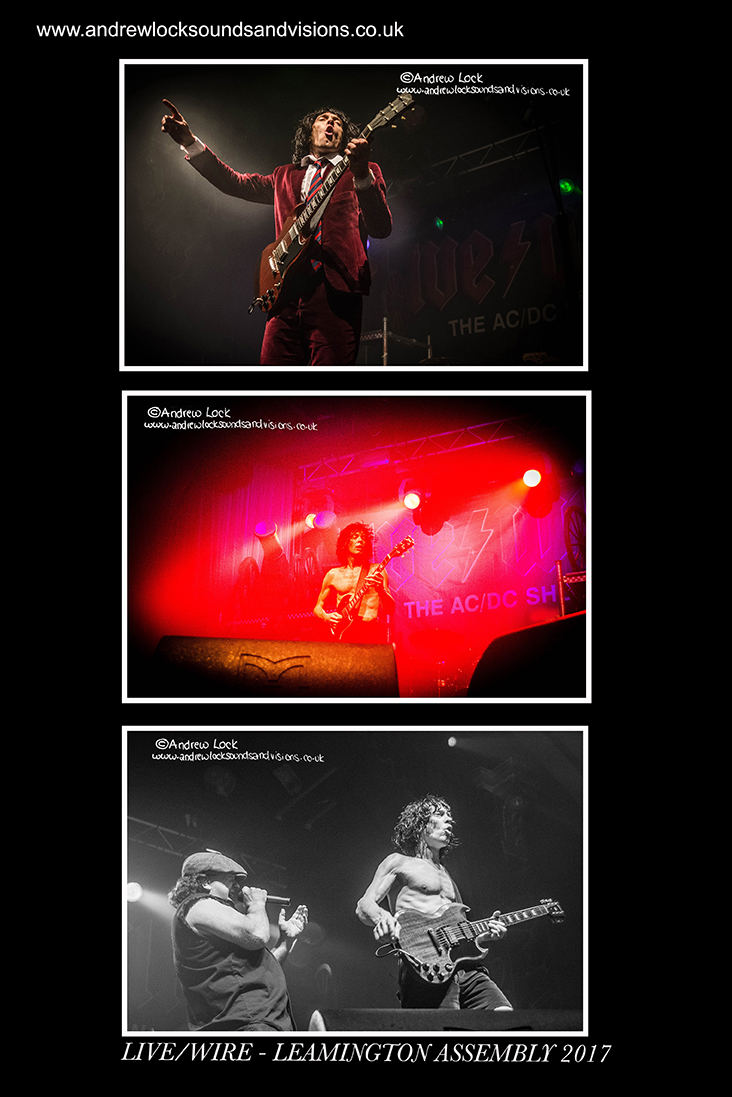 Yet another very welcome return to Leamington for tribute band extraordinaire Live/Wire and their explosive tribute to both the Bon Scott and Brian Johnson eras of the mighty AC/DC which hits the Assembly on Friday 25th January.
Both music and staging spot on with these guys and it is very close indeed to the live AC/DC experience (which I have been fortunate to witness half a dozen times) and they usually attract a good crowd so the atmosphere is buzzing and of course the evening closes with the cannons roaring.
This time around it is a double treat as also on the bill Whitesnake UK who promise a trip through Coverdale and co's impressive back catalogue.
A night of high voltage rock and roll, just the thing to beat those January blues.

The pics are a few of my unpublished shots from the Live/Wire's last show at The Assembly in 2017. 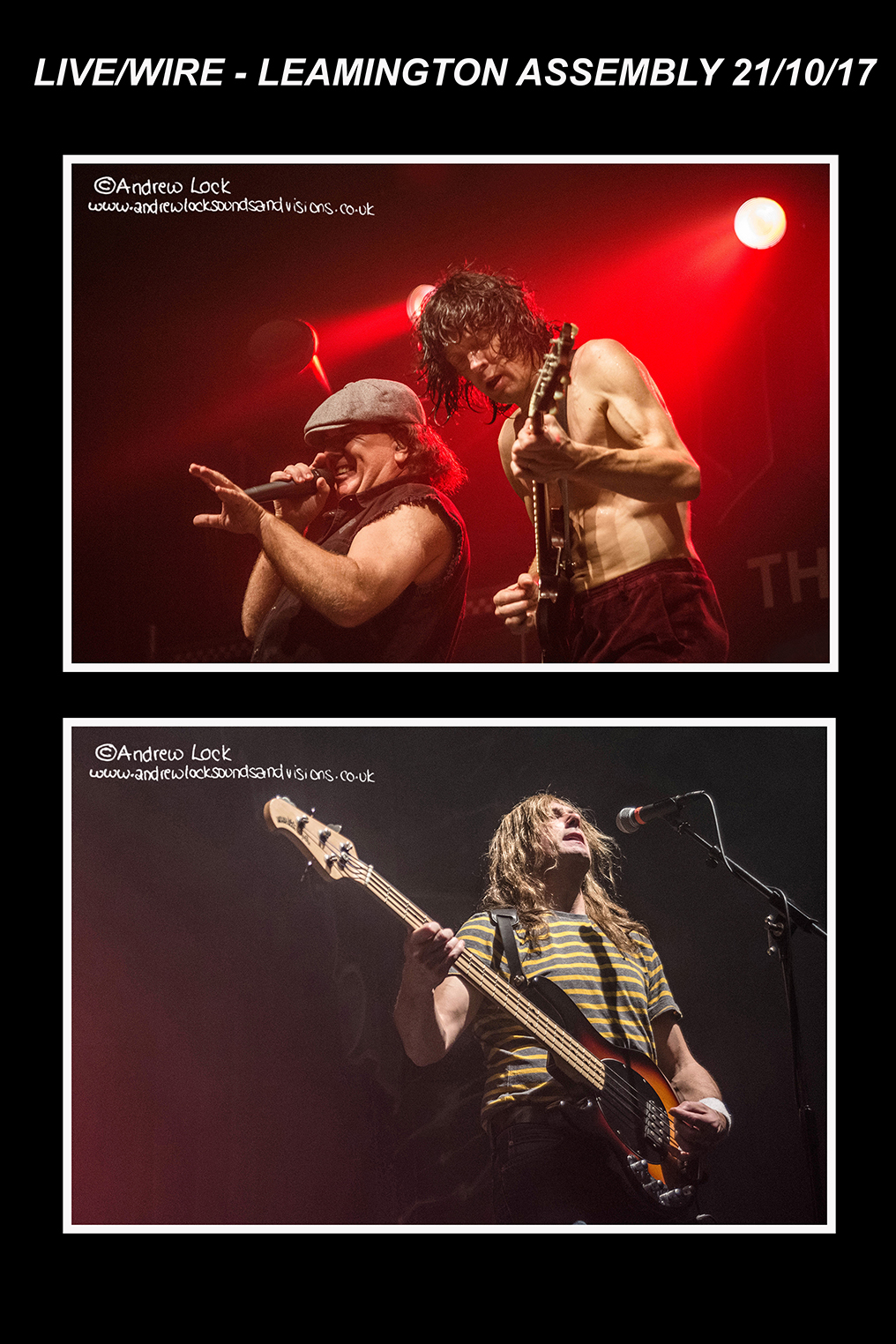 The mighty sounds of AC/DC once again rang out from the Assembly stage as Live/Wire one of the top rock tribute acts in the country returned to what has (and lucky for us locals) become one of their regular stops on the bands touring schedule.
A couple of line-up changes aside it was business as usual and with a new Brian Johnson and drummer (believe it or not a previous Live/Wire Angus!) this was another sizzling show that well lived up to it's name as "The AC/DC Show".
You close your eyes at any part of the gig and it is AC/DC the vocals, that magical Angus Young guitar work and that all important rhythm section all in place and of course visually as well they put so much into the performance.
As always the ace up the bands sleeve is having a Bon and a Brian so both eras of the band are catered for in authentic style and during the Bon set classics like ‘Highway To Hell', ‘Whole Lotta Rosie' and ‘Bad Boy Boogie' (infamous Angus strip in place of course) rubbed shoulders with lesser known fan favourites such as ‘Live Wire' and ‘Overdose'.
The bands Bon Scott also gets the singers cheeky boy antics off to a tee with the voice to match and also delights the crowd with a walk through the audience with Angus playing along on his shoulders.
Our new man in the flat cap taking on the role of Brian Johnson also gets the singers characteristics and vocal style spot one as he prowls the stage for his part of the show.
The Johnson set stretches back from the iconic Back in Black album including the title track, ‘Hell's Bells' and ‘You Shook Me All Night Long' right up to ‘Rock Or Bust' from the latest AC/DC album with crackers like ‘Thunderstruck' and ‘Hard As A Rock' in-between.
Loved the on-stage banter of our Brian especially when trying to insist there was a pint at the bar from the band for the whole crowd (wonder if anyone fell for it!).
All too soon it was encore time and first up the Scottish jig of ‘Bonny' followed by our Bon for a roaring ‘Highway To Hell', then both singers joining forces on ‘Let There Be Rock' and finally the big guns come out booming during an epic ‘For Those About To Rock (We Salute You)'.
You know exactly what you are going to get with a Live/Wire show (as with AC/DC themselves of course) top notch entertainment, great music and a fitting tribute to one of the greatest rock bands of all time.
See you next year lads. 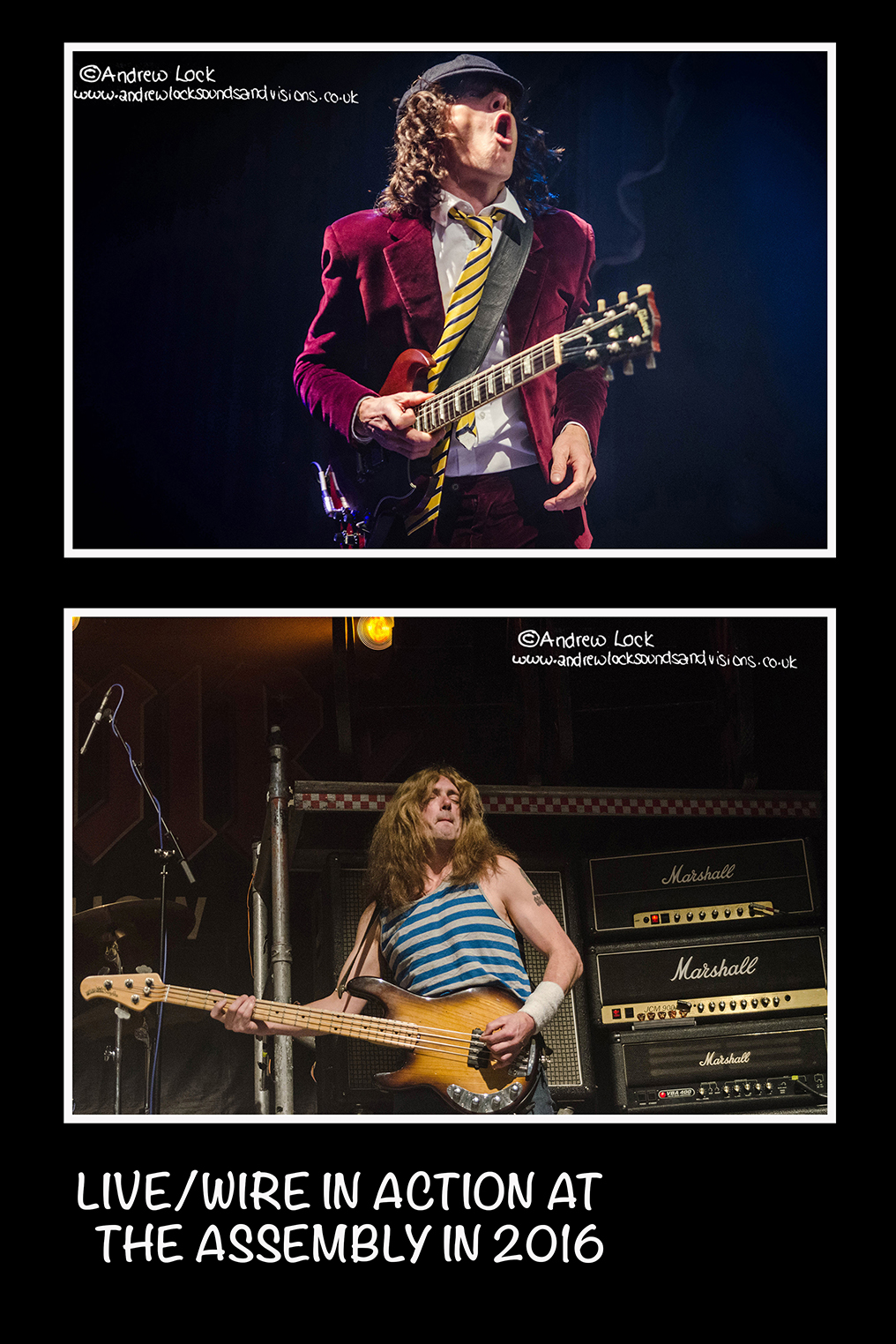 Live/Wire are one of a number of top draw bands that return to the Leamington Assembly on an annual or at least every other year basis and I have been covering their shows since 2008 (both Assembly and elsewhere) with plenty of line-up changes along the way but never a drop in performance levels.
As with AC/DC gigs themselves not many surprises in a Live/Wire set list (thankfully) just a couple of hours of the best rock anthems around which usually include the likes of ‘Highway To Hell', ‘Hells Bells', ‘Whole Lotta Rosie', ‘You Shook Me All Night Long' and so many more.
With two vocalists you get the best of both worlds with a Bon Scott and a Brian Johnson set along with a top quality light show, a cannon or two but also of course that faithful reproduction of the iconic AC/DC sound and showmanship.
Sure this will be a blinding gig yet again and so as the song goes LET THERE BE ROCK. 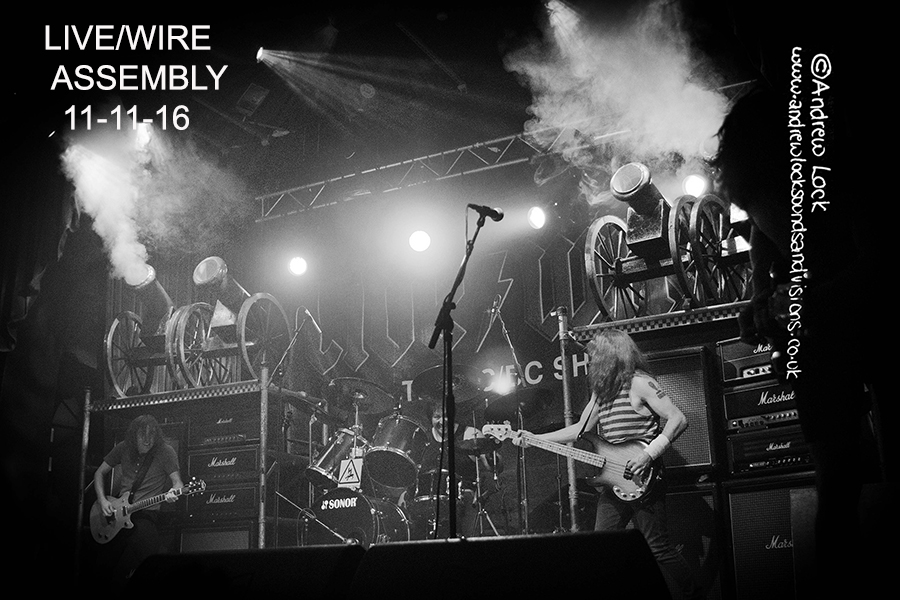 1 of 9
Back once again at the Assembly, the Live/Wire boys and their AC/DC show looked to me an even bigger production than ever with larger speaker cabinets, more cannons and extra lights (may have been by imagination!) and as for the music they as always rocked with a capital R.Manchester blues rockers Federal charm had an early start coming on stage at around 7.10 to a fairly sparse audience (which quickly built up) and as with my last looks at this energetic young band (supporting Joanne Shaw Taylor at this venue and the Copper Rooms in Cov) they impressed me with their drive, power and strong original numbers (also love the interaction between the two guitars).Highlights included opener ‘Master Plan' with it's heavy, driving beat and strong guitar riffs, ‘The Stray' full of cool strutting blues with lashings of slide guitar, loved it when the harmonica made an appearance on a hi-tempo rock and roll number possibly called ‘Hill Billy' and closer ‘Silhouette' was a wonderfully polished catchy rocker.I have realised while reviewing and photographing bands over the years that some music fans look down on tribute acts because not original and copycats, while I can see a little in their reason I have to disagree with this view, for 2 reasons1) They often give fans a chance to have the experience of the music of much loved bands that in some cases are no longer around or maybe when they tour are too expensive for their pockets.2) While listening to the likes of Planet Rock (also on rock magazine fee cd's) I often hear new bands original material that sounds exactly like a new AC/DC, Black Sabbath etc release so closely have they followed the template (do love some of these bands though!) and at least with tribute acts they are completely honest and upfront about what they do.Saying all the above though for me a tribute band have to be bloody good and despite a couple of line-up changes since their last visit to Leam no change in this bands quality and power packed performance, in fact I do not think I have seen them perform better.Lights down, short intro tape and the rhythm section sets the rock solid groove before on bounced the new boys in the band and our Bon and Angus for the first half of the show and I loved that they started with what surely is the bands signature tune ‘Live Wire'.From here it was all systems go on a journey through the Bon Scott years (where it is of course top quality throughout) with the likes of ‘Shot Down In Flames', an epic, crashing ‘Sin City', a stomping 'T.N.T' and with all the usual and much loved Angus theatrics in place a glorious ‘Bad Boy Boogie'.Both recent arrivals to the band did a sterling job both capturing Bon's cheeky boy manner and power-packed vocals while the Angus guitar work, duck walks and tricks were spot on.With barely a pause for breath our Bon departed and our Brian took his place bringing the title track of the last studio album to the table and with a decent sized stage explosion it was a rollicking ‘Rock or Bust' that got part two underway.As with the Bon Scott years all the anthems were in place including a barnstorming ‘Shoot to Thrill', a groove laden ‘Rock N Roll Train', with the preceding sounds of a tolling bell what else but ‘Hell's Bells' and the bands biggest anthem ‘You Shook Me All Night Long'.Encores started with a short fun instrumental Scottish jig to ‘The Bonnie Banks o' Loch Lomond' (must admit I thought this indicated a Scotland win in the Euro match with England taking place at Wembley that night - it didn't !) followed by the return of Bon for ‘Highway To Hell'.Next with both singers on stage we had the legendary ‘Let There Be Rock' complete with Bon carrying Angus on his shoulders around and through the audience before finally the cannons were unleashed for a triumphant ‘For Those About To Rock (We Salute You)' with for me at least the cannon booms/explosions having a little more significance as it was the 11th of the 11th.Fantastic and the same again in 12 months please lads. 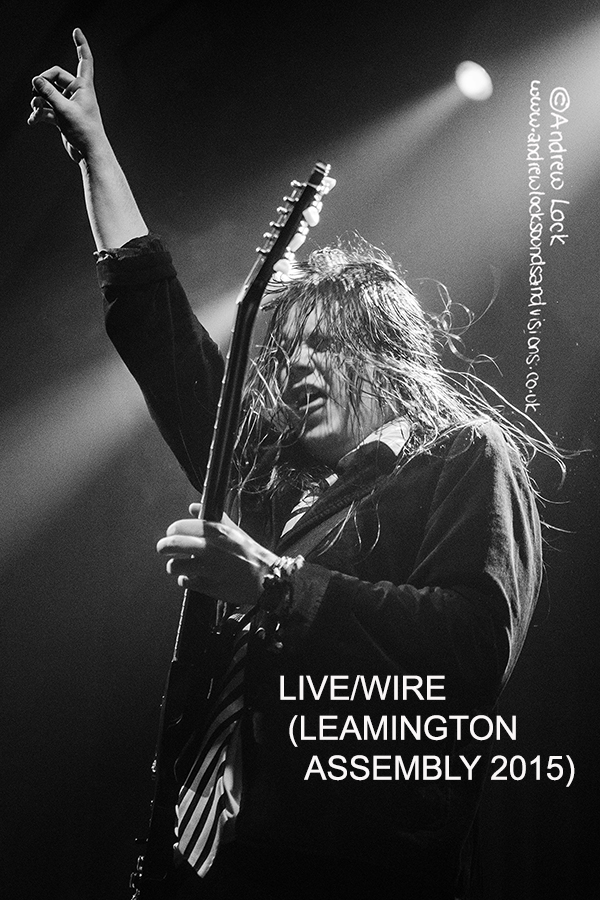 1 of 4
On Friday 11th November the sounds of the mighty AC/DC will thunder inside the Assembly as one of the finest tribute acts around make another welcome return to the venue.My first Live/Wire experience was back in 2008 while on holiday down in St.Ives in Cornwall and since then I have caught them whenever possible when they perform closer to home.There have been a couple of line-up changers over the years but this band have always delivered a blistering set full of the AC/DC classics we all love and the odd lesser known track for the hard core fans.As always the card up the sleeve of the band is that they have 2 vocalists who cover the Bon Scott and the Brian Johnson eras of the band, both doing a spectacular job of covering their chosen frontman.Expect to hear rip roaring versions of the likes of ‘Whole Lotta Rosie', ‘Let There be Rock', ‘Thunderstruck', You Shook Me All Night Long' and many more as well as possibly a cannon or two.Support for the show is top British blues rockers Federal Charm, seen them twice, most recently supporting Joanne Shaw Taylor last year and they are a quality outfit to be sure.See some of you there and all together now "ANGUS,ANGUS".