We don't yet know much about John Kirkpatrick.
Get in touch and we'll add some details. 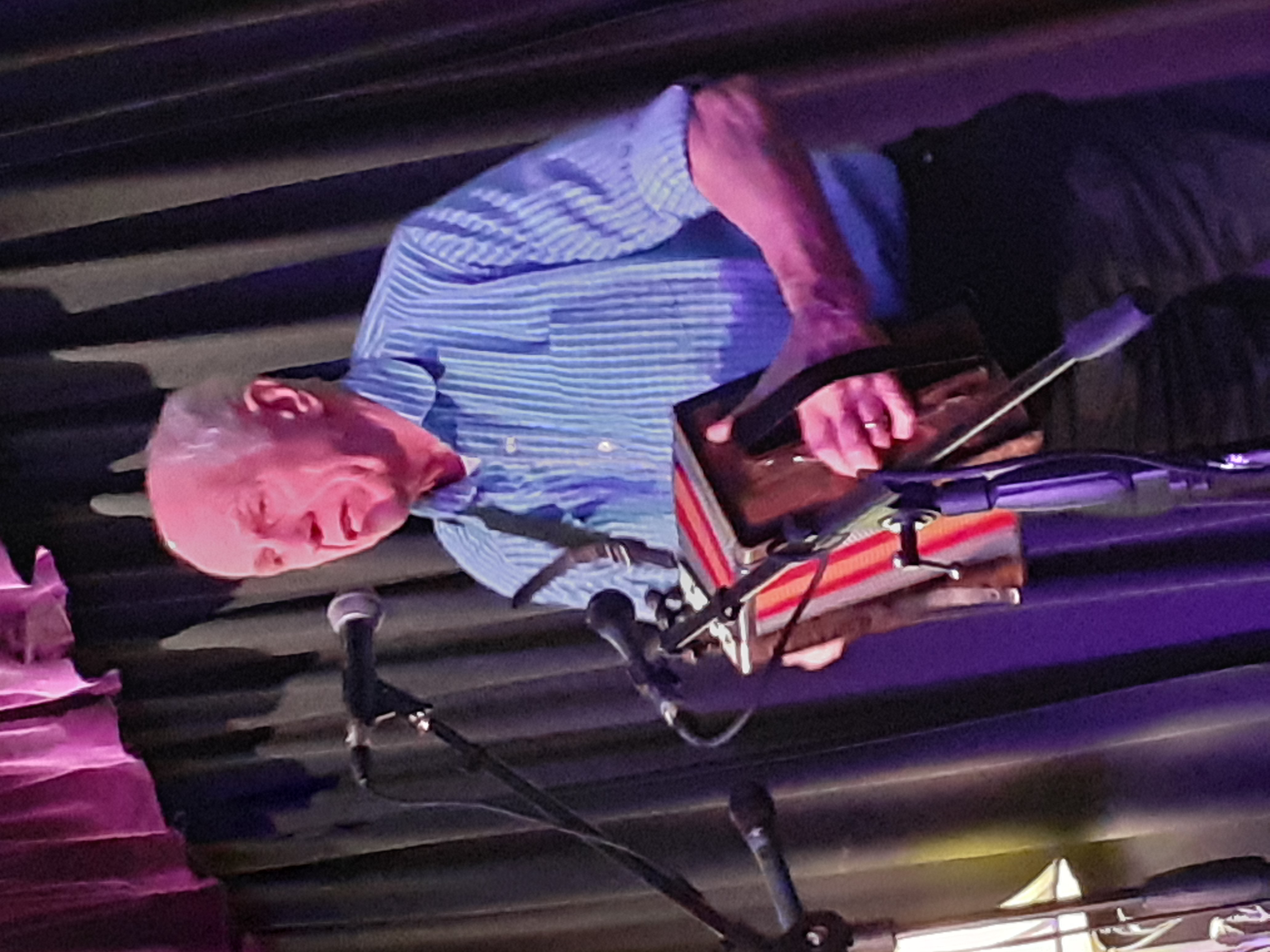 Having reported on last month's inaugural Stratford Playhouse Folk Club gig, I was delighted to make its follow up as well.

Doug Armstrong & colleagues have an admirably ambitious vision for this venture, but having started so strongly with the combination of Martin Carthy supported by Jack Blackman, my concern was that sustaining such a high quality might be their biggest issue: once you set expectations at such a level, the pressure on you must be significant.

In the event, they rose to the challenge with a similar combination: a hugely respected icon of folk (in this case John Kirkpatrick) supported by one of the stars of the local scene:  Jen Waghorn this time.

John of course has a CV too long to include in full in a review anyone would have the stamina to read, though I think it's worth picking out his having played with Martin Carthy in bands such as Steeleye Span & the Albion Band to provide an anything but tenuous connection with last month.

This is the first time I've reviewed Jen (or for that matter John): you may know her as a member of Greenman Rising but last night was a solo outing.

I tend to get a bit over excited when writing about musicians for the first time here (or to be strictly accurate the ones whose music connects with me) so here I go again as I was very moved by what I heard.

Of course expectations being exceeded tends to fuel such reaction & knowing Jen as primarily a fiddle player within a group left me (not much to my credit I suppose) woefully unaware of what a solo act might consist of let alone feel like.

She certainly played some wonderful violin but her voice (I'd tend to class it as maybe a contralto which itself is pretty rare) was a revelation. Opening with an a cappella version of Buffy St Marie's "Johnny Be Fair", she set her stall out immediately with not just the quality of her voice but her stage presence & physical delivery of the song, with dramatic pauses, gestures etc adding much to the performance.

From then on it just swung: she has that charisma in her act and while that added much to the technical delivery, above all what I appreciated was her sheer undisguised joy in performing & performing this material.

What I also like about how the club is already shaping up is how Doug is pairing musicians from different generations who offer complementary perspectives to "folk" (I said much on this subject last time too) and demonstrate not only batons being passed on but how the tradition is not merely being kept alive but reinvigorated.

To this end, while John played all his instruments in the traditional format, Jen made much of a loop effect to embellish her songs and build many up into complex layered arrangements, including ones brought in from the seventeenth century.

She was also unafraid to tweak the older lyrics to reflect her own & contemporary values: she was especially articulate about her desire to portray women protagonists in the songs as possessing agency when originally they were subject to that of men.

However for me, the outstanding moments were Jen's two final songs, both originals, one about pirates Anne Bonny & Mary Read (and in one of those spooky coincidences, the song referenced their colleague "Calico Jack" Rackham who was also the subject of a recent Alchemista single reviewed in the magazine) and the other a somewhat macabre tale about "Winchester Geese": Southwark sex workers whose earnings enriched the Bishop of Winchester but who were denied consecrated burial. Both songs fizzed with passion & energy, sparkled with wit & provided showcases for dazzling extended instrumental solos. I look forward to hearing both on record & catching her live again.

I'd also like to take this opportunity of wishing her all the best for her imminent nuptials.

John Kirkpatrick is once again one of those musicians whom it seems, given his pedigree, somewhat impertinent for me to review…. though given how much I enjoyed his performance, maybe you'll excuse my personal viewpoint.

Once again, aside from his playing, what came across was his huge and abiding love of & enthusiasm for what he plays: and to be honest it seems that outside of playing, he still spends much time researching & seeking out fresh material. When you see this on a stage feet in front of you, it really lifts you as an audience member.

Coupled with an easy rapport with audiences, this came across not so much as a lecture on English folk music (although John was more than happy to share the contexts of what he was playing to increase our understanding) nor a straight musical concert. It was more a sense of delight in sharing music from communal folk traditions & bringing us into what our ancestors would have experienced as central to their lives.

For much of his interest lies in more communal folk music: tunes for dancing (with or without swords) and structured annual coming together of communities: a lot from the Morris culture he has been involved in since his teenage years (and continues to dance as a member of The Shropshire Bedlams). Starting with a medley of tunes written to celebrate Saints' days, the theme of marking the passage of seasons and years rang throughout the set.

There were of course some songs designed for solo rendition and more original ones than one might have been expected from this well known collector: including one commissioned to help stimulate an interest in singing in children. One particular favourite of mine was an instrumental which came to him in a dream: the complex but delightfully Parisian sounding "Double Dream Waltz" which is unlike anything else in his repertoire.

I doubt if many were surprised by his virtuosity on instruments such as melodeon, concertina and button accordion, but his rescue of the humble triangle for one long song proved not only what this often overlooked instrument is capable of but brought us back to the world of vernacular performances & songs originally created by & for performers without anything like the playing skills (or access to instruments) John has.

Another highlight and a notable & appreciated gesture and a nod to the club's last concert, he also played the saucy "Riding Down to Portsmouth" which he performs when playing with Martin Carthy in a duo format.

On a personal note, I appreciated the numbers he performed which had originally been collected by George Butterworth of High Ercall in Shropshire (a village with which I have family connections) including "The Green Mossy Banks of the Lea"  which noted down in 1908 from Mr Lockly, the eighty-year-old sexton of the village church.

It's wonderful to hear such playing of such quality at any time, but I reiterate points made above as I feel so strongly about them: the strength of this new club is already evident: it's about the highest quality folk music for sure, but it's also about providing a platform for evangelists of the tradition: those who can bring forgotten or unheard songs to a local stage but also enthuse others with their own excitement for the music & help ignite new generations of players. If you are a fan of the great names lined up (and there are some big ones) then this club is for you for sure. However there is a great deal too for the younger generations just beginning to explore folk music…