We don't yet know much about Honky Tonk Rose.
Get in touch and we'll add some details. 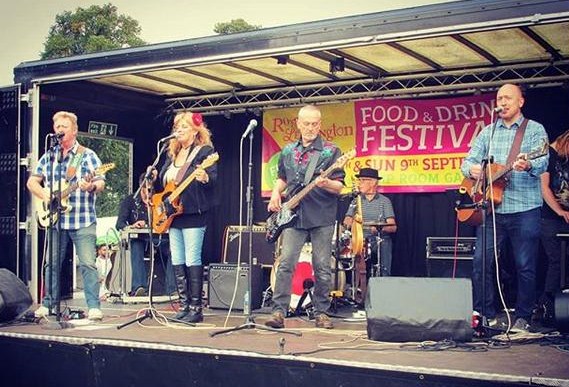 Honky Tonk Rose always promise their audiences "three chords & the truth" but on this occasion they also served up, appropriately for the occasion, thematically appropriate songs: at one point bassplayer Horace Panter promised us "a couple" of songs about alcohol, but they spoilt us with four in a row (like bottles I suppose): with more later. The country music catalogue is full of heartbreak & tears & we got plenty of those in the lyrics, but Honky Tonk Rose transcend the subject matter & brought good cheer to the well attended festival. I particularly noted the excellent moves by the several dancing toddlers yesterday's set attracted.

I watched this band last year (though on the now dismantled bandstand which is being renovated) with an umbrella in hand & got a bit cold and damp, so it was pleasing that the rain had passed this year by the time they came on.

Many thanks to guitarist Rob Fielden-Nicholls (husband of lead singer/rhythm guitarist Sylvie) who today filled in for usual HTR member, violinist Jools Street who was required for duties in the far north.....

Honky Tonk Rose play country music they tell us, but they play from a broad palette which embraces associated genres such as country swing, cajun & r&b and range from the well known to covers of artists not even band members themselves all knew: it can be an educative experience as well as an emotive one with this band...... 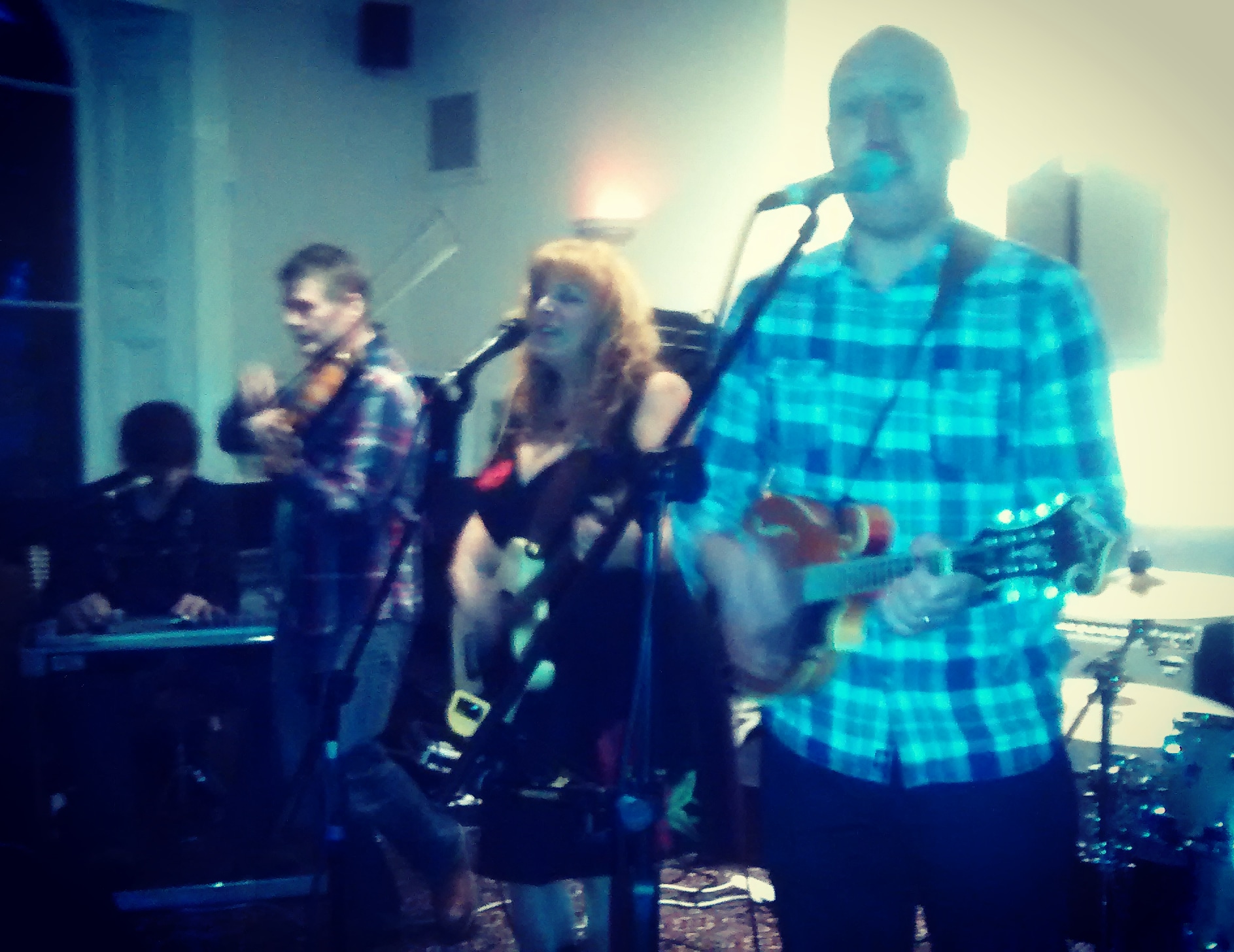 I have seen locally based Country supergroup Honky Tonk Rose several times since their formation. Their great experience, wonderful musicianship & desire to put on a great show has always appealed, but even more attractive is their evident love of what they are playing & an ability to wander through all country genres, highlighting the lesser know songs along with the classics.

This time however, was my first experience of them since the departure of founder Roses Holly Hewitt (lead vocals) and David Page (lead guitar & vocals), whose membership of vast numbers of other bands (including, but not limited to Gloria Sunset, Retroville & many permutations of the Hounds) did not, alas, leave them time for Honky Tonk Rose. Instead violin/fiddle maestro Jools Street (the Rude Mechanicals Band, I, Doc Brown, Russian Girlfriend & many more, including playing with Dubliner Sean Cannon recently) and singer/guitarist  Sylvie Fielden-Nicholls  (vocals & electric guitar) have now joined core Roses  Big Jim Widdop (vocals, lap steel & dobro), Horace Panter (bass),  Malc Evans (lead vocals, acoustic guitar & mandolin) and Rick Medlock (drums).

Generally, when bands change lineups, especially when the incomers form a minority, you might expect the act to stay roughly similar with minor adjustments. So I was intrigued to see what would unfold. Perhaps inevitably given the quality of the band, it was effectively seeing a new outfit.  Obviously bringing in a violin changed the arrangements and offered completely new dynamics: the interplay with the steel guitar in particular producing a very different sound. Equally, Sylvie's vocal style & pitch (not to mention her unique stage presence) meant that she did not step into Holly's considerable shoes, but brought her own along instead (they were a  pair of cowboy boots for the record).

However beyond this, the band had taken the opportunity of revamping almost the entire set: which was pretty amazing (I can't imagine they find too many rehearsal slots mutually convenient). They still play a huge range of songs from all styles of country & associated genres from writers such as Gram Parsons, Jim Croce, Rodney Crowell, the Louvin Brothers, Merle Haggard, Patsy Cline, Loretta Lynn, the Carter Family, Hank Williams etc etc (and thankfully the superb Cajun version of Chuck Berry's "Promised Land", a showcase for Jim is still in the set), with each one introduced by Horace which helps especially with the stuff I didn't recognise.... The expeditions into countrified versions of soul songs & other non-country genres is reduced with this lineup, and whereas the former formula swung, the new one does too, but it also rocks a bit harder & louder.

The venue, at Leamington's Oak House (formerly the Liberal Club) is an interesting one. Previous gigs I've been to there were upstairs in the function room, but this one was downstairs in the members' bar. On the plus side, the audience response was brilliant: loud & appreciative with much dancing: most of those present seemed to be club members rather than Honky Tonk Rose's travelling support, so they clearly won new fans over. The negative side was the large pillar mid room which presumably left Sylvie & Malc audible but invisible to most of the audience (I took the precaution of siting myself up close & wide of the obstruction). I am advised that they are looking to remove this (they assure me that it's non load bearing).

Apart from the audience mentioned, it was great to see another local country star Cary Lord in attendance at her first Honky Tonk Rose gig.  A member of many local bands & one of the Leamington Crown Hotel jam night musicians, Cary was a member of the all female ‘Indigo Lady' who played Nashville in 1986 at the 15th Country Music Association Awards and picked up an award for "CMA International Show", and at the infamous ‘Bluebird Cafe' in Nashville & who also worked with Boxcar Willie & with Elvis's backing singers the legendary ‘Jordanaires'. Cary was telling me that her forthcoming latest solo album has a strong country feel too.

We catch up with Holly Hewitt 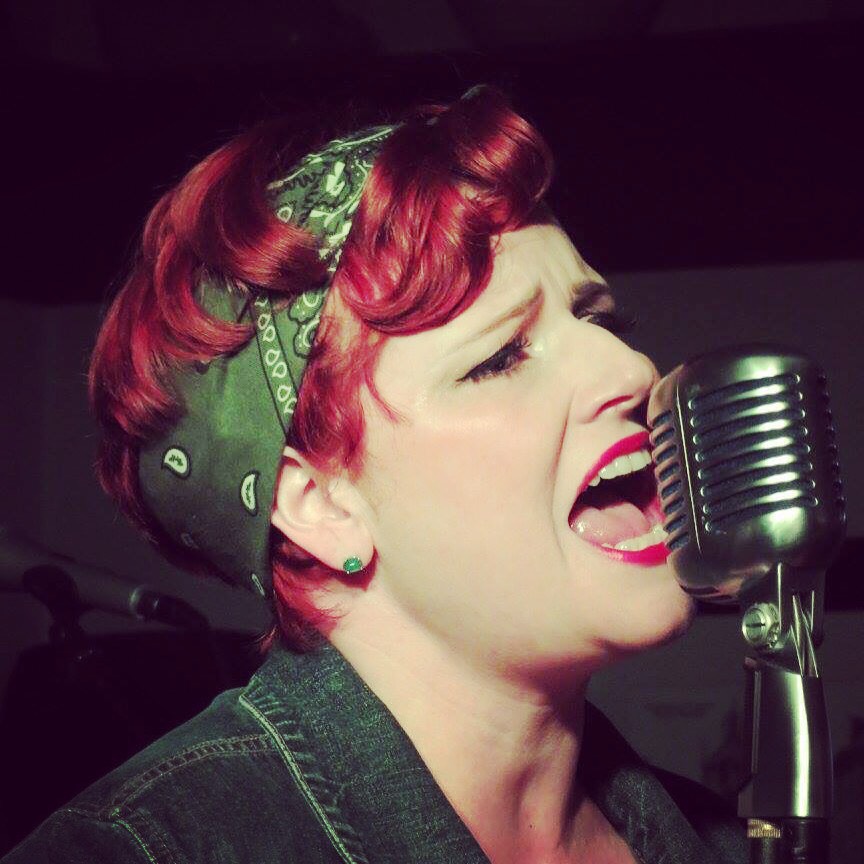 HML: Can you tell us about what you're up to on behalf of the Alzheimers Society? Why is this cause important to you and how can people help?Holly: I do freelance music sessions in some of their day clubs for people who have dementia. Music is a great way to connect to feelings and events from the past. The charity does a great deal of vital work to improve the quality of life for everyone living in a family with this condition. We did an event in Coventry and raised some funds for them as well as putting on a great night and wanted to do the same in Leamington. Every bit of money raised is well spent. https://billetto.co.uk/en/events/honky-tonk-rosehttps://www.alzheimers.org.ukHML: Tell me a bit about the acts you're working with these days. Holly: My main job is performing as my alter ego Gloria Sunset in a retro duo with guitarist Dave Page, playing well loved blues, jazz and rock n roll. We get to travel all over the country. From time to time we perform locally at Morgan's Bar, Bedford Street, Wildes, Bar Catalan and Pomeroy's. All are great venues known for putting on quality acts and are supportive of the local music scene. Becoming full time performers has taken time. The right moment only came around recently and we have great support from our families. I'm in my 40's and Dave is in his 50's. It's hard work that we throughly enjoy and have spent years working towards. We appreciate every moment and take nothing for granted. Gloria Sunset Honky Tonk Rose is a dream of a project and I feel very lucky to be part of it. A 6 piece country covers band that Horace Panter (The Specials) brought together. Every gig has been received with great enthusiasm. We only started performing in February and have played at some great venues, including The Jamhouse and The 100 Club (although they had a powercut and it didn't happen) Our next gig will be 'Red Hot Chilli and Country' in Leamington on 13th May with any money we raise going to The Alzheimer's Society. The Folly Brothers will be our special guests. We promise a fabulous night of bluegrass, country, Americana and of course chilli. Get your tickets while you can! https://www.facebook.com/honkytonkrose/

HML: What's happening with the Larks of Leamington?

Holly: The Larks of Leamington Spa is a singing group I run on Monday nights at The Band Factory. It's always open to absolutely anyone who enjoys singing. It's key purpose is fun, making friends and developing confidence. The group are sounding great! We end each term with some kind of performance and hope to do another one at Foundry Wood, a really special place to perform. https://www.facebook.com/The-Larks-of-Leamington-Spa-333483310180461/ HML: What's your view on the state of local live music in Warwickshire?It feels like there has never been a better time. There is so much going on, such a high quantity of quality musicianship and a wonderfully supportive network within the community. There are only ever one or two degrees of separation and you find everyone knows, has been in either a relationship or band or both with everyone else. Lots of us are making a career out of it. It's bloody hard work, but possible. Local business, bars and restaurants are realising how great it is to have a such a pool of talent to choose from on their doorstep and there is a better understanding of what the fees should be. Venues are really seeing the benefits of having live music and there are more opportunities to play locally than a few years ago. HML: What other local acts should people be checking out?Holly: Where do I begin.. ? The Wap Waps, The Peas, The Pips, Shanade of course The Folly Brothers, Stein's a great front man, The Jack O Bones. The Wednesday Jazz Jam at Bedford Street is a great place to hear some of the best Warwickshire locals. Depends what you're into, this magazine is great for bringing the best info into one place. HML: Do you have any advice for other local musicians?Not really advice, everyone finds their own way and has different aims. However, It's become clear to me that music as a career means you approach it like any business. Also, Working with musicians you really like, with similar goals and commitment helps your success hugely.
Web