We don't yet know much about Gods Toys.
Get in touch and we'll add some details. 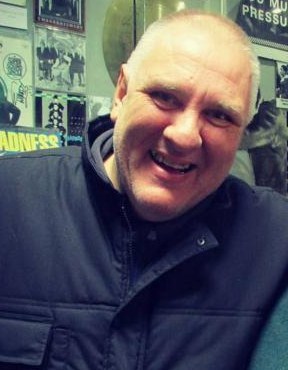 It was a real privilege to be present today at the Big Lottery funded "Sounding Off" session at Coventry Music Museum by local legend Stephen Davies, better known to all his fans as "Dill"Those of us who saw Dill in his heyday, fronting bands such as Gods Toys and "I" will need no reminding of his great charisma on stage. He cut such a contrast to the lead singer of The Specials, a band who preceded Gods Toys as local scene setters: and indeed who helped them. Gods Toys gigs were often aided by loans of equipment by Horace Panter and several of the band lodged with Jerry Dammers at one time or another. Whereas The Specials' singer adopted a downbeat onstage persona, Dill was a whirling dervish of an entertainer, setting the tone for gigs with high energy, exuberant performances. Many people, including Annie Nightingale of Radio One tipped the band for stardom: their material was as great as their performances. However as detailed in the recent "Articles in Sound" project book & film and expanded on today by Dill, their intended "breakthrough" tour with Adam & the Ants during which the latter exploded from punk cult status to mega stardom, also proved their swansong: despite featuring Dill's favourite gig (at Manchester), tour frustrations split the band: though Dill is still reluctant to blame a mysterious "plug pulling" incident in Coventry on an allegedly envious Adam Ant after the audience showed their preference within the two acts.After Gods Toys, Dill teamed up with various other top local musicians such as Dave Pepper, Rex Brough, Chris Hull & Rick Medlock from the X-Certs and created "I", a band whose name was given to him by a mysterious voice and which has clear links to Rastafarian beliefs. Again, the band attracted much positive attention & like Gods Toys appeared on television. Initially creating performances aimed at emulating church services (spirituality is a very strong recurring theme in Dill's work: as is humour: he described this approach today as "putting a sugar coating" on serious topics) and evolved after several personnel changes into a proto-hip hop act: a move which in all honesty was so far ahead of its time that it did not receive the appreciation it deserved at the time.Apart from his stories about his life in the music business, Dill was very open about his own issues: ranging from the help hearing voices has given him (as noted above) in his creativity, to the health problems which have resulted in ongoing treatment & medication. Unsurprisingly, he has not been active in music as much as he should after the demise of "I", despite a single day in the band Fashion. Today however, things are very much looking up. Working with his old friend and housemate Martin Bowes (of The Cage Studio) whom he helped set up the legendarily influential local fanzine "Alternative Sounds" in 1979, he has released an "I" retrospective album on the old "I" label, Iconclast and this week his first solo album: "Artificial Intelli-gent" (under the name Daffod'i'll). (Available from Coventry Music Museum). Given the number of songs he wrote while not actively performing, he has many other tracks he hopes to release in months to come (although a Gods Toys retrospective, something many fans would love, would of course need the green light from the other members: something currently being worked on). Dill is also gearing up for a return to live performance.Look out for the video of Dill's "Sounding Off" on the Coventry Music Museum's Facebook pagehttps://www.facebook.com/groups/Covmusic/?multi_permalinks=1214184492027606&notif_t=like&notif_id=1492267583977125Check out Dill's music and news of future gigs herehttps://www.facebook.com/daffodillmusic/?fref=ts
Audio