We don't yet know much about Diz n Rox.
Get in touch and we'll add some details. 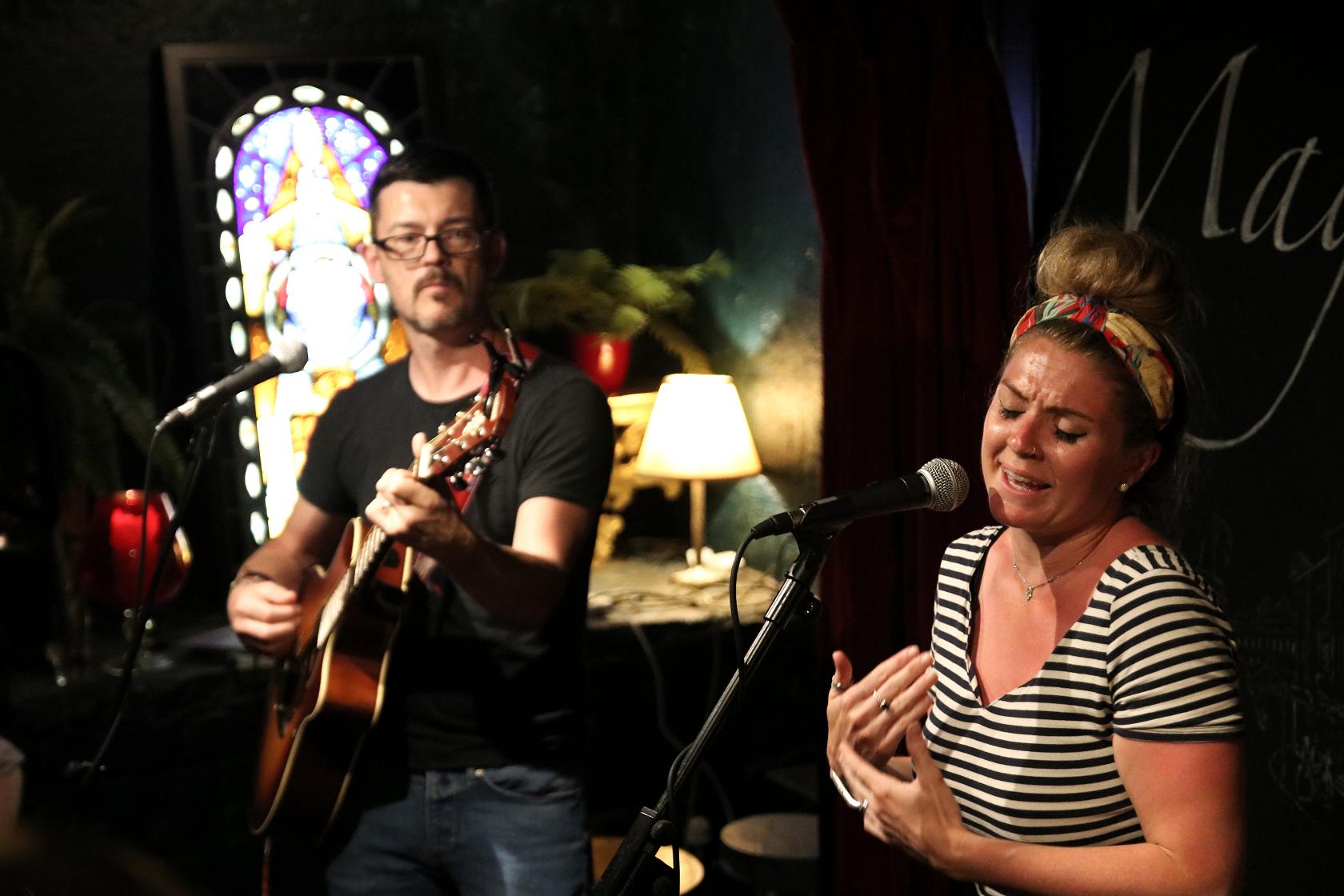 Wow what a night! On a sweltering June evening, maybe going underground was the best option, even though the Magic Lantern had to deploy extra fan power. Sweat poured off the performers' brows & guitars needed plenty of tuning attention.  High octane performances only fuelled the effects still further in an evening of intensity yet real joy in music & the playing of it.

The first act was singer-songwriter Andy Beglin, aided by cajon player Nick Jones. Paul has a long & noble part in local music culture through singing with such seminal bands as Dark Actors, (which also featured Nick) DbMA and Four Kings. However in recent years he has taught himself the guitar and embarked on a solo voyage, testing himself along the way but through such challenges building a wonderful  developing repertoire of really personal & deeply thoughtful songs, whose intensity & qualities are really suited to such a venue where they can be properly listened to & absorbed. Powerful stuff, Andy  describes them as mournful, and there is much introspection on show & themes, not least examining the need of mature men to deal with mental health issues (this is you'll gather an autobiographical one as most, if not all, are). However it is not all dark shadings: "Mademoiselle's Hotel" struck me as a most enjoyable upbeat tune. Equally, regardless of the lyrical content, the entire set went down extremely well with the packed house who know a great thing when they see it. That his cover was Gram Parsons ("Brass Buttons") is only confirmation of his taste,

These songs mean a huge amount to Andy and he clearly is in no rush to record them until he has perfected them. Working at a discrete location he is gradually polishing them ready for a release: when he is satisfied with the fidelity with which he has captured them. In the meantime he has released a few on Spotify & YouTube which I urge you to explore & I equally advise your seeing him play live: perhaps at the Godiva Festival or opposite Coventry Cathedral on July 11th before the Specials' gig. In a particularly strong era for local writing of integrity & individuality, this is another talent I can thoroughly recommend. You can find out more here:

Headliners Diz n Rox are Paul & Sheryl McClean. Each plays original music you may know already (here is room for another Godiva Festival plug as Sheryl's "other" band The Session will be opening the Festival from the Main Stage) and this act gives them the opportunity to explore & celebrate their own personal favourite music, usually at private functions so we were very fortunate to be present at a rare public performance. Judging by the size & enthusiasm of the audience (which must have been the most age diverse one at the venue so far), this was a universally held view.

"Eclectic" barely sums up the mix of songs. Performed wholly from the heart with palpable pleasure verging at times on abandonment, the sets (there were two of them: not sure we could have managed such intensity without a pause for breath) ranged across most genres including the familiar reworked in their own fashion to many totally unfamiliar to me. And neither a drop of Oasis nor "Brown Eyed Girl" (which seems for some reason to be a target for mediocre mauling currently): this was not your standard covers set. The manner of performance was without doubt "musicians having a ball" and of course included all you'd expect from skilled musicians, not least Sheryl's incredible vocals which threatened at times to burst the integrity of the structure: she sang a fair proportion of one number off mic & frankly all that did was emphasise how little she needed one in that space. The final piece of the jigsaw was the great humour: jokes were cracked incessantly between them & with the audience. Infectious stuff too.

Much of the talk during & afterwards was about integrity of performance (Sheryl even commented on one song how disappointed she was at hearing it sung without meaning on X Factor etc simply because it gives room for showing off technical ability: she then proceeded to reclaim it) and Paul & Sheryl clearly love music & have the skill as well as the desire to demonstrate it. This obviously rubs off in their home life too as, stunning as their set & that of Andy were, the big surprise of the evening was the stage debut of their eight year old daughter (and what an honour for the venue that they felt it appropriate) on ukulele & vocals. I gather she had intended two songs but was so enthused that she delivered a third. Utterly assured & at home, I recoil a little from predictions, but if in 2029 you see Bo McClean's name on posters, I wouldn't be surprised. Goodness knows how good she'll be in ten years' time.

You may not get to see Diz n Rox as often as Andy Beglin (at least not as this duo) given their busy schedules, (though I guess you might try booking them privately) but hopefully they will return to this venue. If you do: it will be a rare treat for you. They don't have a webpage nor Facebook page either but do maintain Twitter (https://twitter.com/DiznRox) & Instagram (https://www.instagram.com/diz_n_rox/) accounts.

I tend to focus on what I feel (and maybe that is the best word: reacting to great music & other art forms defies words & comes as much, if not more ,from the heart as the mind) is the great music we are lucky to have around us at the moment. I love celebrating the talented, the unique & the passionate as much as I like experiencing it. We all know however that there is plenty of mediocre music out there, played when the fire has gone out or played to show off skill rather than for love, and I hope "Hot Music Live" in some way helps chart music lovers way through the mundane to the great. Believe me, witnessing everyone last night, Andy, Nick, Paul, Sheryl & Bo, no one could be in doubt at the depth of commitment & joy in the song.