We don't yet know much about Dispensable People.
Get in touch and we'll add some details. 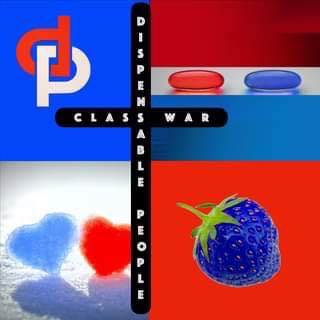 The band, comprising Baz on lead vocals & guitar, Olly on bass & backing vocals and Roger on drums, have long kept the flag flying in Coventry & Warwickshire for political old school punk: by which I don't mean Mohicans & sub Sham 69 type arrangements but thoughtful, passionate songs with that touch of reggae which so many of the great early punk bands like the Clash, Slits, Ruts or Members brought to the table & which later got elbowed out by identikit ranting. In fact "Class War" is the sort of thing the Ruts were good at: declamations about the state of our nation over a slow dub inclined groove.

The subject matter is very much "them & us" in times of austerity & growing inequalities, the pressure on the NHS and as they put it "we are living in a divided nation where there is one rule for the top 5 percent and another for the rest of us. How is it possible that people are dependent on Food Banks and that there are record numbers of homeless, poverty being seen as  acceptable within our society?"

Personally I can't dissent from the argument, I admire their sentiments & sincerity & this is certainly the sort of music I've always enjoyed listening to. May the change they hope for come to pass.