We don't yet know much about Alice Hubble.
Get in touch and we'll add some details. 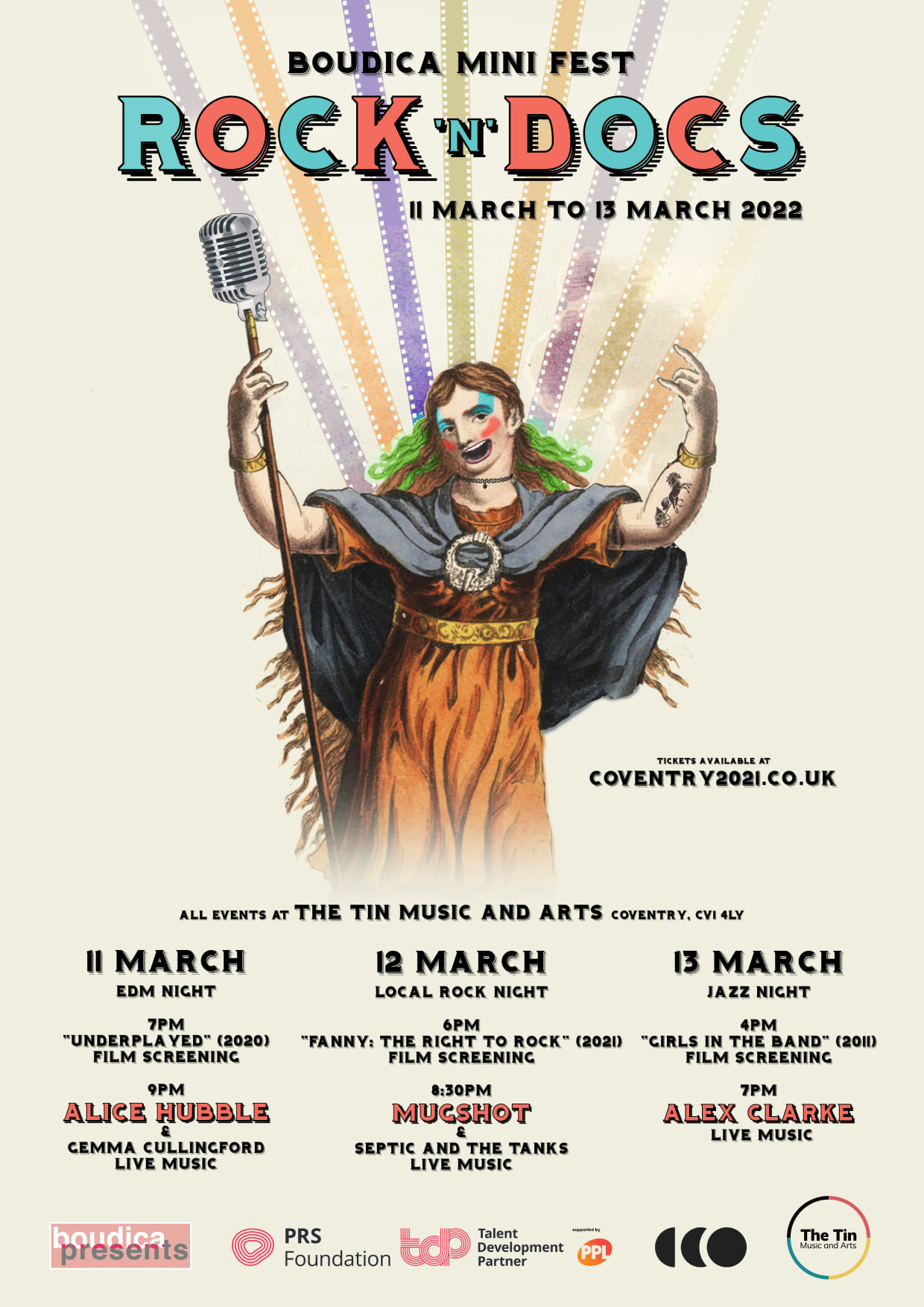 You may know Michelle as a musician (check out "Make Babies" from Duck Thieves (of whom she is one) on ‘Hot Music Live Presents Volume Five') or as a film maker (her Baileyface Productions "Stripey Socks" was reviewed in the magazine back in 2020).

For Boudica, her two skills come together (as they frequently do) as the festival showcases both a collaboration with Cinecov to present a series of Rock ‘n' Docs films about women in music, each followed by live music.

On Sunday 13th, there is 2011's "The Girls in the Band" screened with a subsequent performance by Alex Clarke

With a female focused line up, Boudica Festival is a unique event that gives a platform to and celebrates the wealth and diversity of women and non-binary talent in the music industry both on the stage and behind the scenes.

Women and non binary artists have always been under-represented in all aspects of the music industry. Low woman representation is an industry wide problem, with a growing awareness seeing many festivals being called out for their male dominated lineups. The response from some festival organisers has been there are not enough woman musicians out there to book. Boudica Festival however seeks to change this opinion by showcasing women and non-binary musicians from across a wide spectrum of musical genres across 3 stages showing this is more than possible.

A long term aim, as well as having a stellar female line-up, is to form an all woman events crew, using the expertise of women sound engineers, lighting technicians and stage managers. As well as providing a platform, we want to highlight the opportunities available to women within the music industry other than performing.

Did you know that:

"Women make up 60% of interns, 59% of entry-level business roles, but only 30% of senior executive positions in the music industry."

"Women make up only 14% of PRS for music writers and performers." PRS For Music Foundation

"Women account for about 5% of all audio engineers and producers." Women's Audio Mission

As the Boudica organisers themselves put it:

"As women who have worked in the music and events industries for numerous years, this is a subject that's very close to our hearts. It is great to see that positive steps are being taken to bring equality to the music industry, however we don't think this is happening fast enough which is why we want to challenge the festival industry by running a specially curated music festival that showcases the best up and coming female and non-binary artists across a wide range of genres. If we can host an entire festival of female artists what is stopping them from upping their female representation on their lineup?

We hope that the event provides people, whatever their gender, a place to discover new music, try something new at one of our workshops and ultimately inspire individuals to kick-start a career in the music industry!"

As I frequently state in this magazine & elsewhere, I believe we are extremely fortunate to have so many highly talented female and non-binary artists currently in Coventry & Warwickshire: on a scale never previously experienced. Each one moreover seems to be writing & performing in her/their own authentic voice which cannot at all always be said of the music industry as a whole.

I am sure initiatives like the Boudica Festival play a major part in stimulating & supporting this & will, if supported themselves, continue to impact upon the local scene beneficially. We need to sustain the current successes, encourage new talent to come through inspired by the musicians of today and perhaps most urgently, address the inbalance in regards of engineers & producers. I would also say that the gender inbalances in significant numbers of festivals & multi-act events can be improved.

I'd like to think that we at "Hot Music Live" and "Hot Music Live Presents" aer focussed on such goals but what single event can have the impact Boudica can? Please support them!